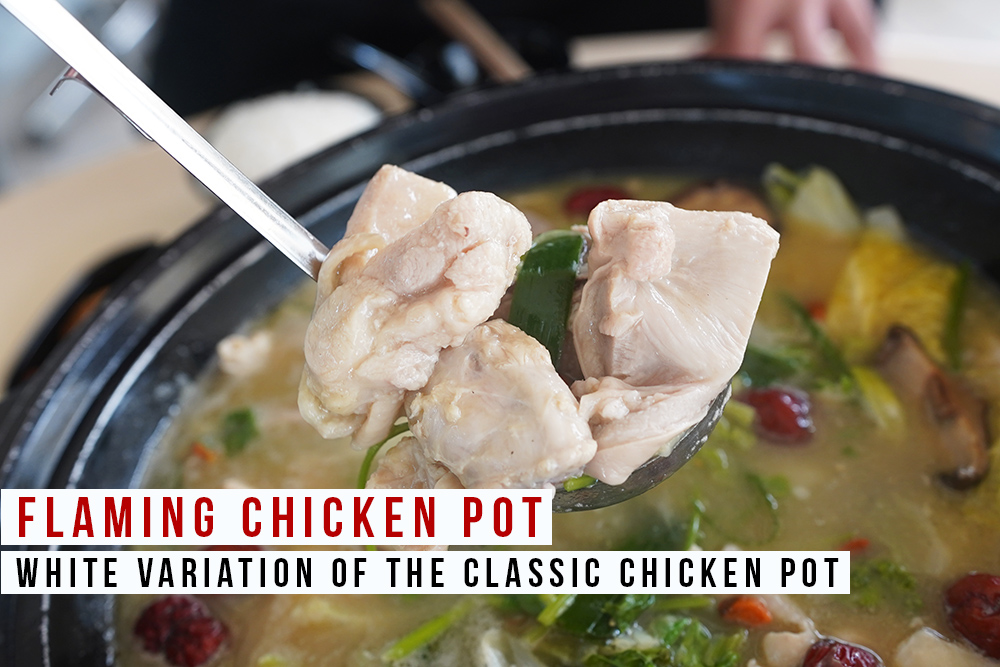 Yishun has earned itself a notorious reputation among Singaporeans, but it does have a few redeeming points, one being this delicious Flaming Chicken Pot!

At Hiap Hoe Eating House conveniently located right beside the MRT (so you don’t have to venture out too far into unchartered territory), prepare your tastebuds for an invigorating time. 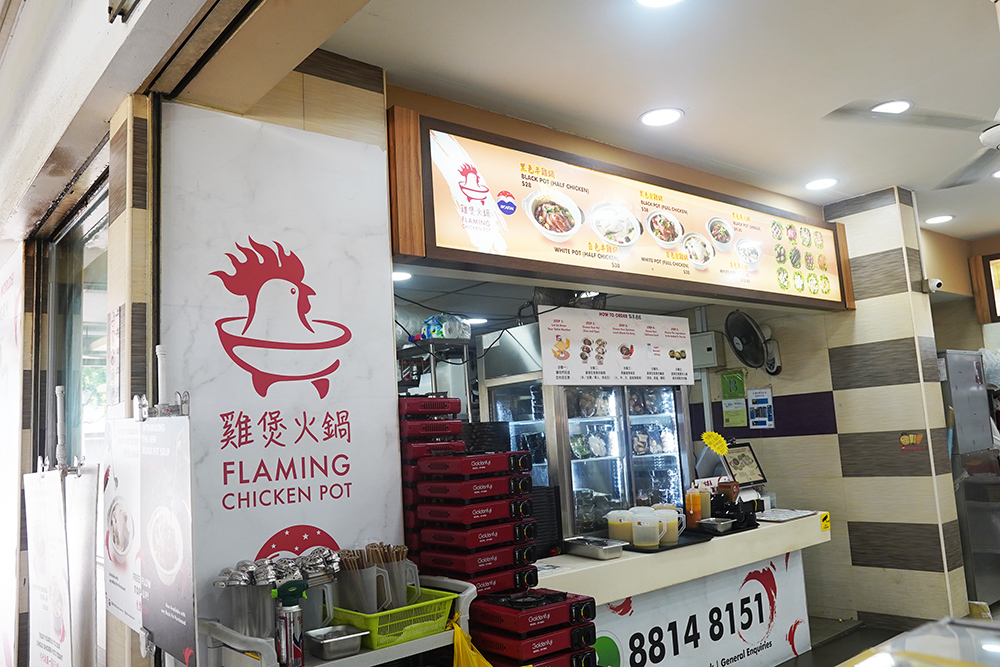 While typically served stir-fried in dark broth, Flaming Chicken Pot provides a light spin to the stereotype with a ‘White’ variation– which is also the first of its kind on our sunny island! It incorporates ‘Nose to Tail’ dining, which means that every part of the chicken is used for 0 wastage.

They also offer a plethora of extra hotpot ingredients that could be added to the stew at various prices ranging from $0.80 for noodles to $4.80 for meats and seafood. Traditionally, Chicken Pot is first eaten dry, then soup is added to the leftovers and other food items are tossed in. 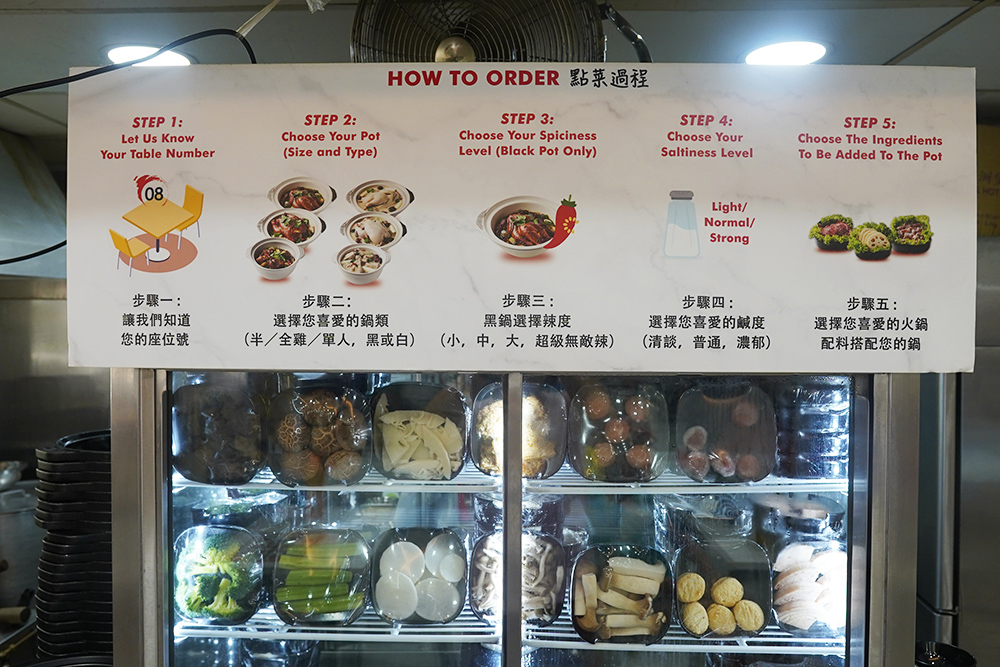 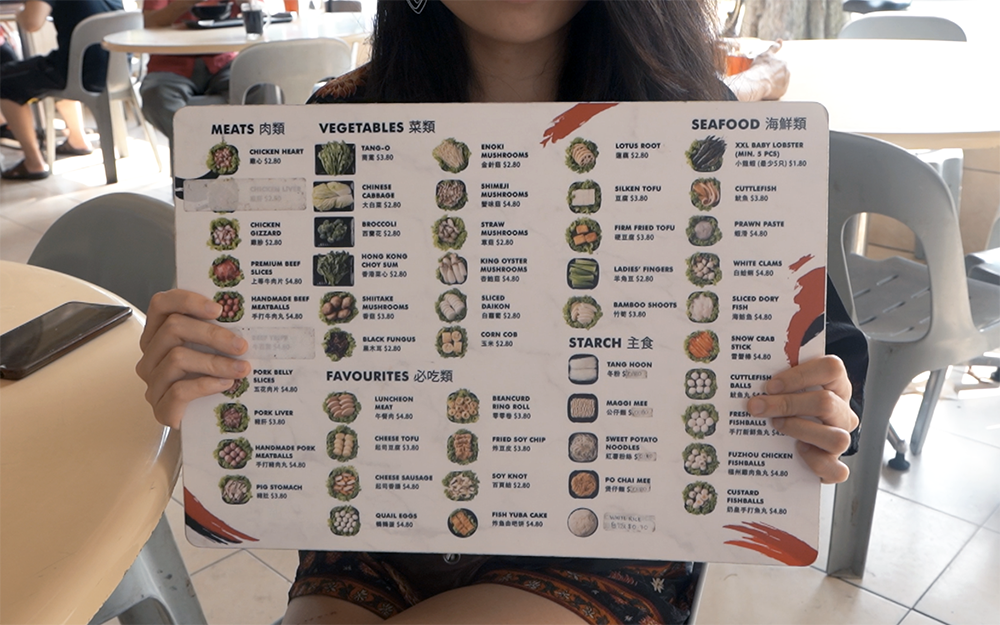 For our perusal and to sate our hankering appetites, we ordered both the ‘Black’ and ‘White’ flavours, along with an assortment of vegetables, rice, meats and more to complete the meal. Not long after, the White pot ($10.80) made its graceful debut to start our gastronomical adventure. 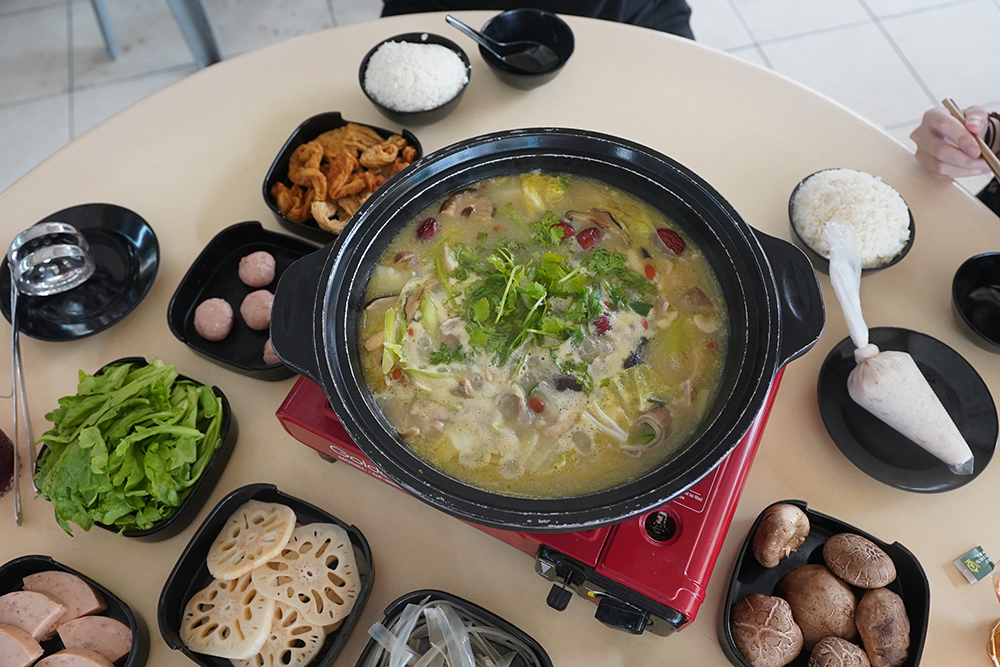 With a soup base consisting richly of chicken bones, secret ingredients, collagen and  painstakingly simmered for 8 hours to achieve perfection, this was noteworthy indeed. The medley of constituents might lead one to expect a clash, but every single addition flowed together perfectly to create a broth that was more of the sum of its parts. Despite boasting numerous dimensions, it was light, silky and not overpowering in any way. There was a slightly spicy aftertaste and I picked up a hint of vegetable.

The chicken meat was to die for. Succulent and tender, the flesh melted right in my mouth: 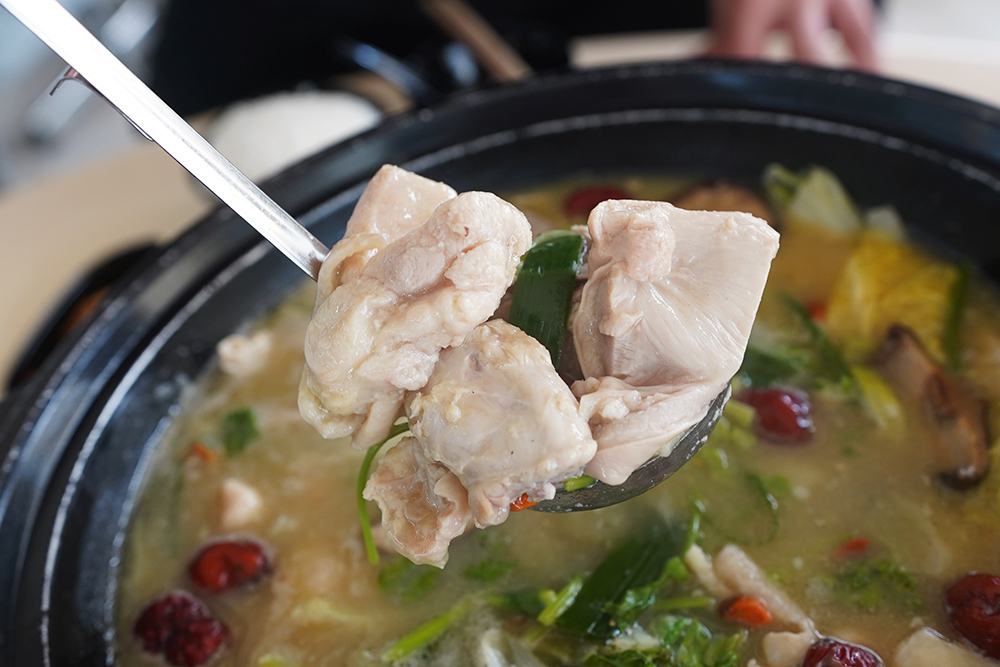 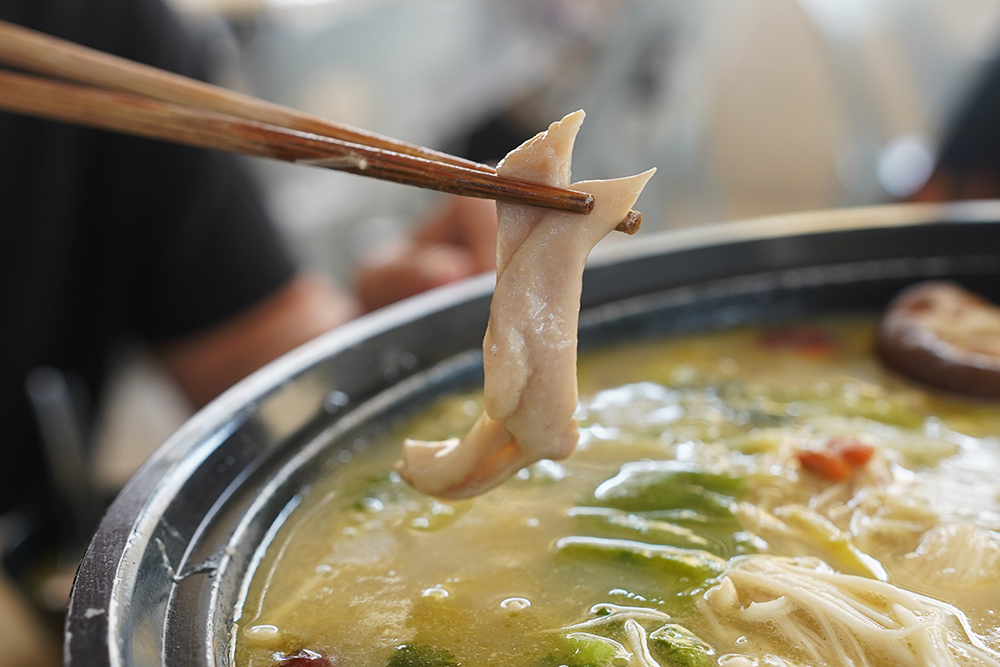 When we had devoured the first serving, the Black Pot ($9.80) came to continue the feast.

This was a sight to see: To invoke a slightly charred quality and to enhance flavour, the pot is flambéed with a dash of moutai liquor ($10 per shot) prior to having the main dish mixed in. This was an enjoyable sight and made for some visual entertainment while eating. 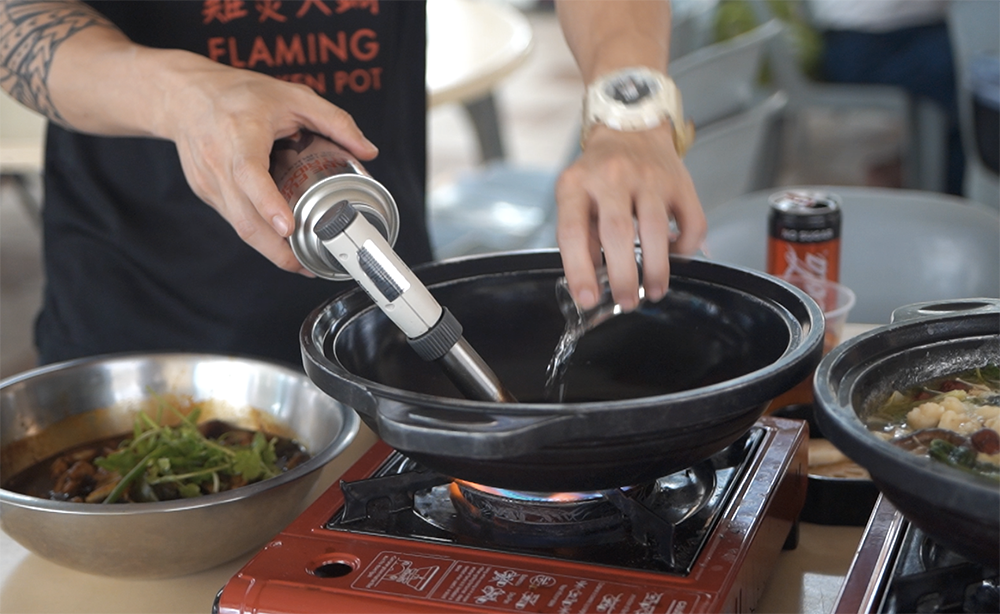 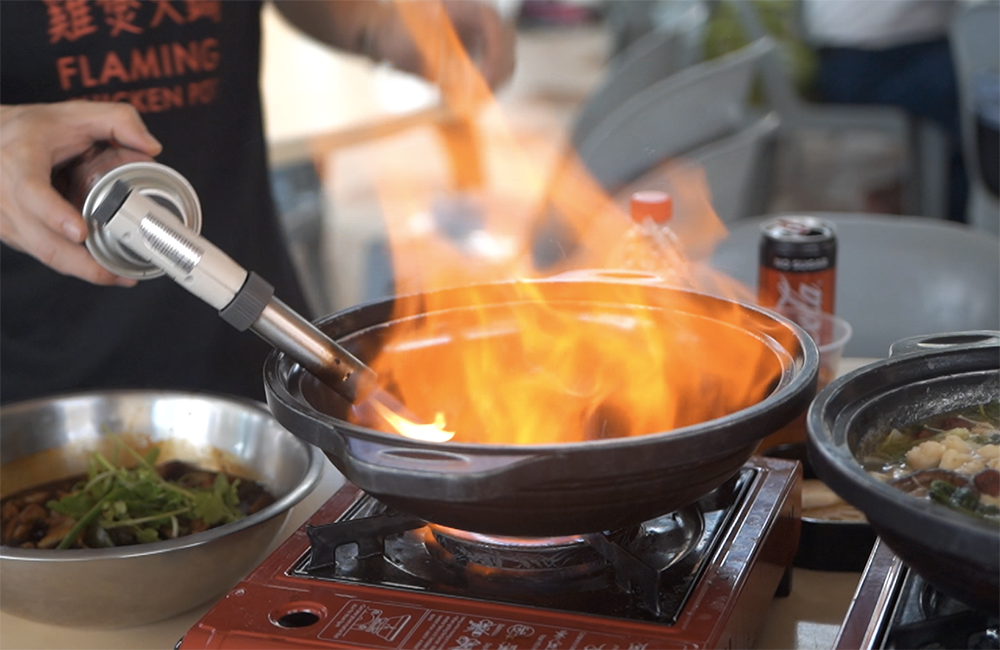 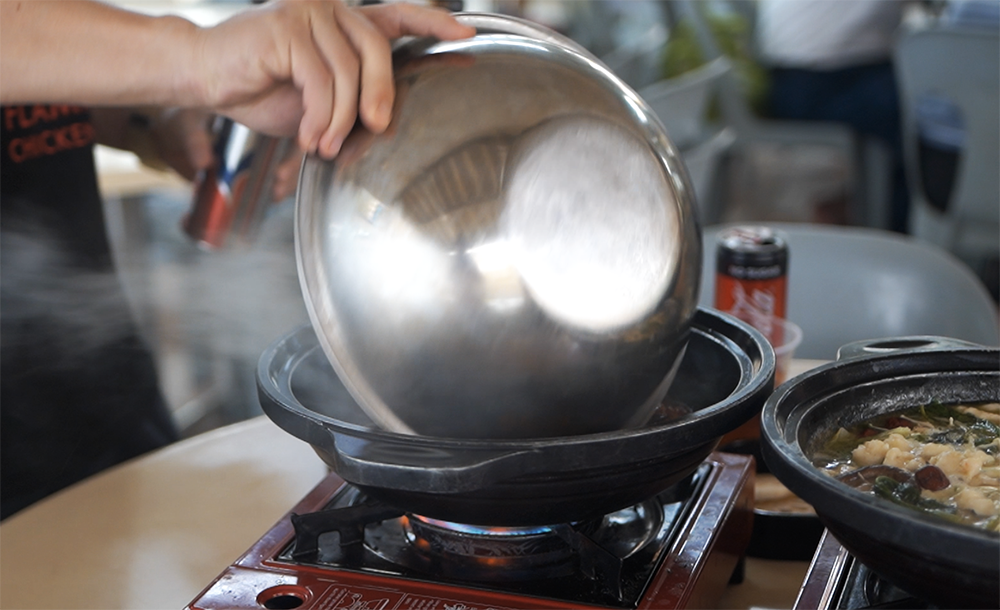 I would describe this as stronger in taste, yet not as sophisticated as its former counterpart. The sauce packed a peppery punch and I appreciated its sweet touch– however, the others weren’t too keen, commenting that it was a tad too sugary for their palate. 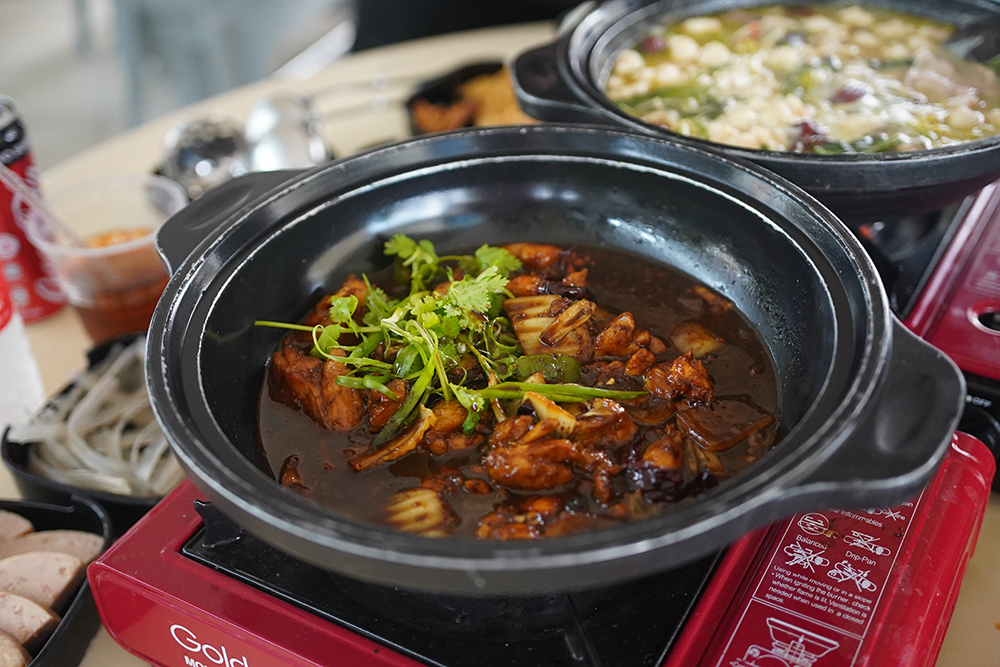 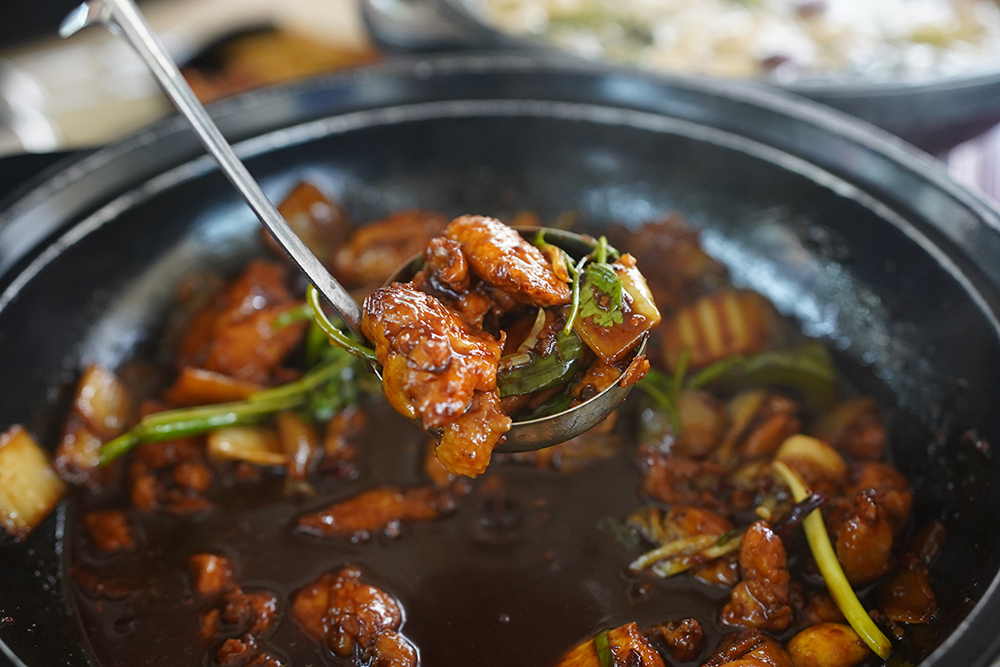 Feeling a little adventurous, we infused some Moutai into the remaining White Pot soup. Surprisingly, they synergised well and the alcohol provided an interesting edge.

Last but not least, the fresh hotpot ingredients were definitely worth mentioning. I took a shine to their mushrooms particularly, enjoying every moment of the crunchy enoki and juicy black caps. All in all, the premium components and novel concept stole our hearts (and stomachs), leaving us satisfied and smacking our lips. 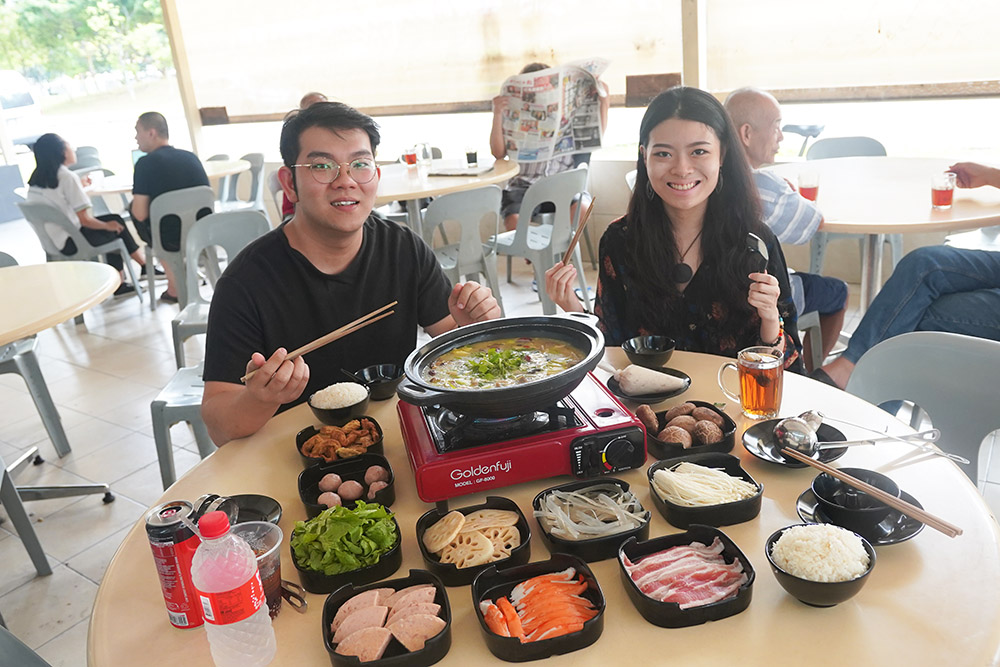