So, our team was invited to Grand Mandarina for a dinner; beautiful lavish interior designed restaurant serving delectable fine Chinese cuisine. Yes, we managed to feast upon many really fantastic dishes but one amongst those dishes, this Chinese barbequed pork AKA Char Siew dish really stood out because all of us gave a big “WOW” to this dish after having the first mouth! The taste came really shocking to us because we literally had never tasted any other Char Siews better than that!!! 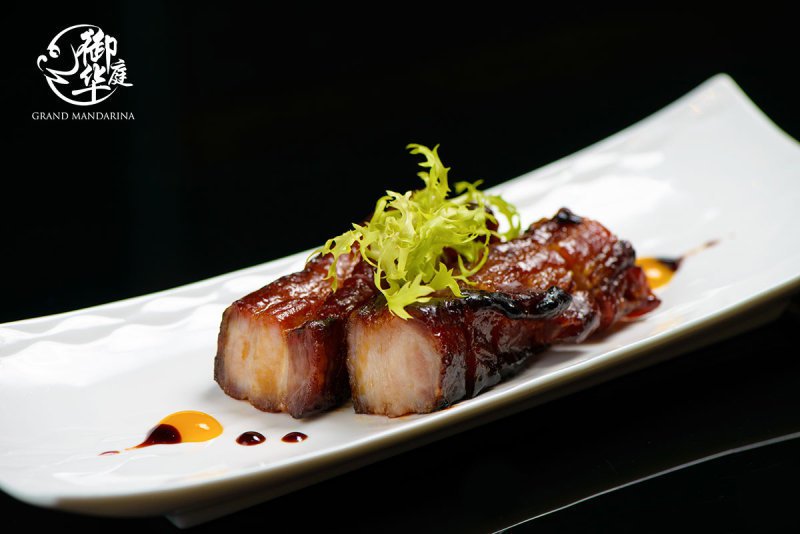 This delectable meat came way back from its origins, which is actually created by a Cantonese. We doubt if there’s any Chinese in this world had never tried marinated barbequed pork (Char Shao in Chinese, Char Siew in Cantonese) before. The love for Char Siew has never died out. They can also be found selling in countries like Africa, United States, etc. It is an international cuisine which suits the international taste buds. What’s so special about every piece of Char Siew is because of its sweetness of the meat after marination, fragrance, and tenderness of this slightly fatty meat. It was listed at number 28 on the “world’s 50 most delicious foods” – readers’ poll complied by CNN Go in 2011.

We literally food hunt for Cantonese style of char siew all over Singapore and finally we have found the DA ONE that surpasses every aspects of a perfect char siew delicacy you can ever imagine of! From the glossy looks, to the succulent taste, to every bit of texture you can find in Grand Mandarina’s Char Siew delicacy. It was simply AMAZING & MIND BLOWING! How they managed to achieve that bright red colour of the meat is because of the red yeast rice wine the restaurant uses, basically every proportion of ingredients in their marination was perfect.

One day you guys were to go down to try their Char Siew, do not forget to savour every taste you can find within that meat.

Do take note of the outermost layer of the meat. It was barbequed perfectly until it achieved its heavily caramelised texture for one to savour. Without realising, the inner part of the meat would have melted in your mouth by then, INSTANTLY! DAMN GOOOOOOD, DAMN SHIIOOOOKK!!! We rated this Char Siew10/10!!!  We also rated this Char Siew delicacy as the BEST Char Siew in Singapore. The price is not cheap (good enough for 2 to 3 Pax), cost $18.BUT it’s 100% worth every single quality to satisfy your growling stomach and munching cravings. Imagine yourself eating the BEST Char Siew in Singapore recommended & rated by “Damn Worth It!” JIO your friends down to Grand Mandarina and share this wonderful dish to them now!