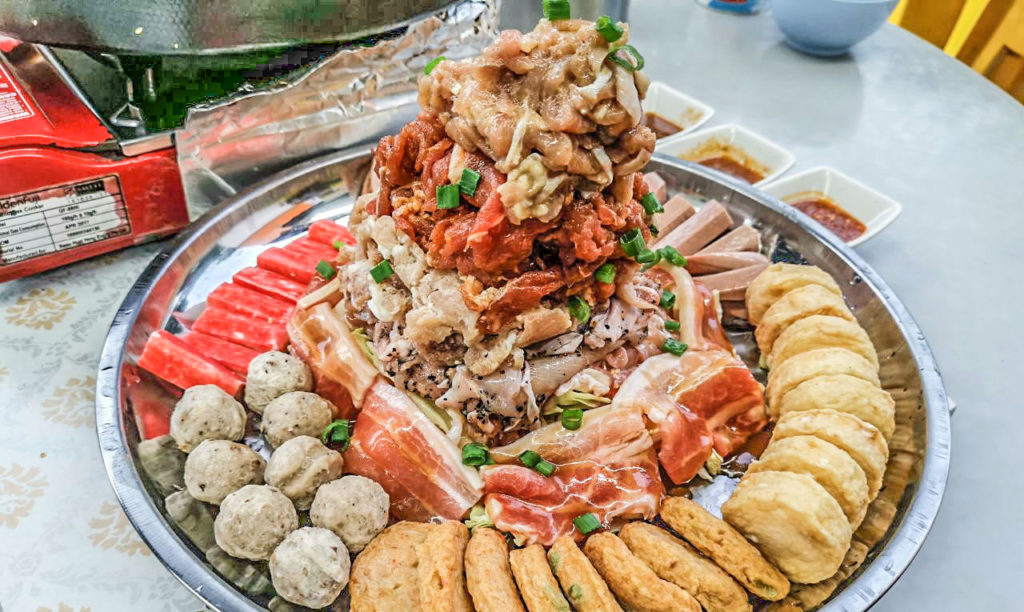 A lazy Sunday evening well-spent would involve being surrounded by good food and company, so without any further ado, I called my three best friends down for a meal at Claw Mookata. At 116 Bukit Merah View, Kim San Leng Coffeeshop, it just three bus stops away from Redhill MRT station. Hence, locating the heartland food stall was convenient and hassle-free. 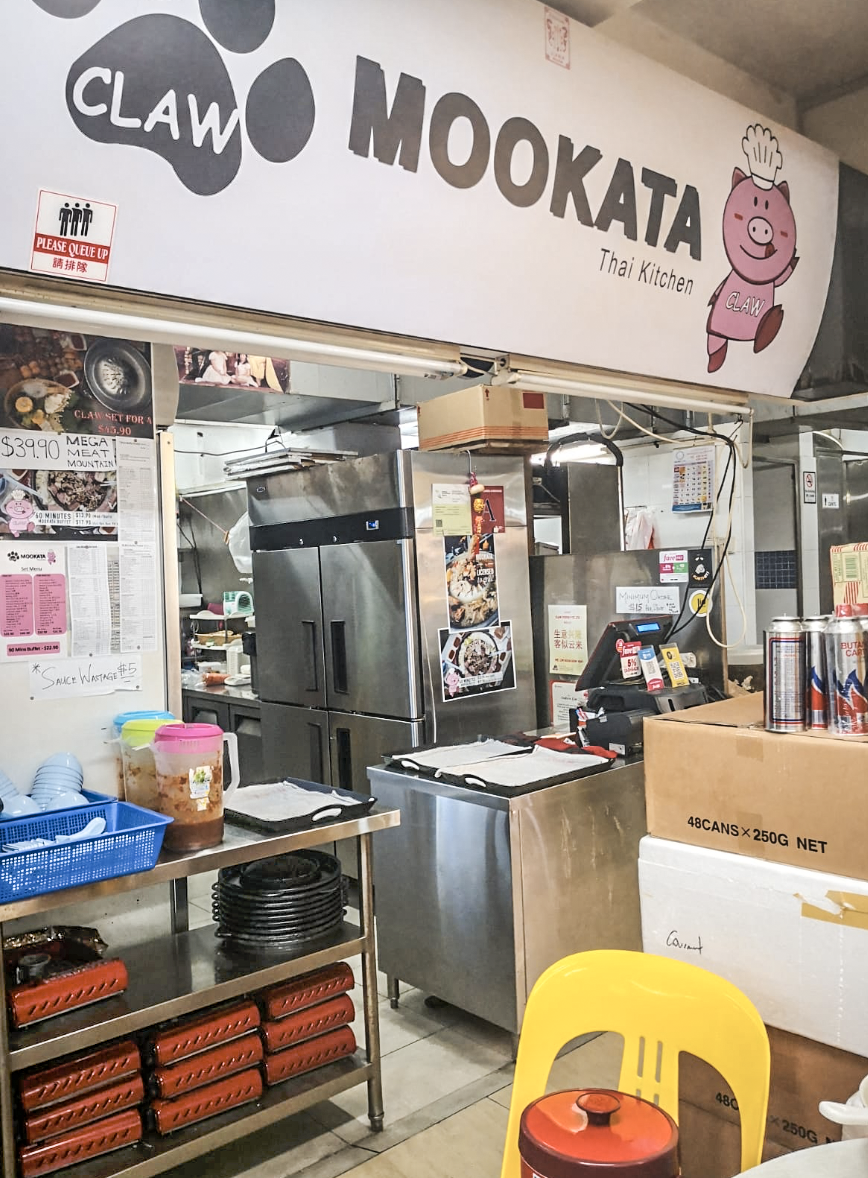 As I approached the façade, I was told to sample their special Mega Meat Mountain and make myself comfortable while they prepared the hearty giant.

We readied our bellies for the feast that was to ensue! 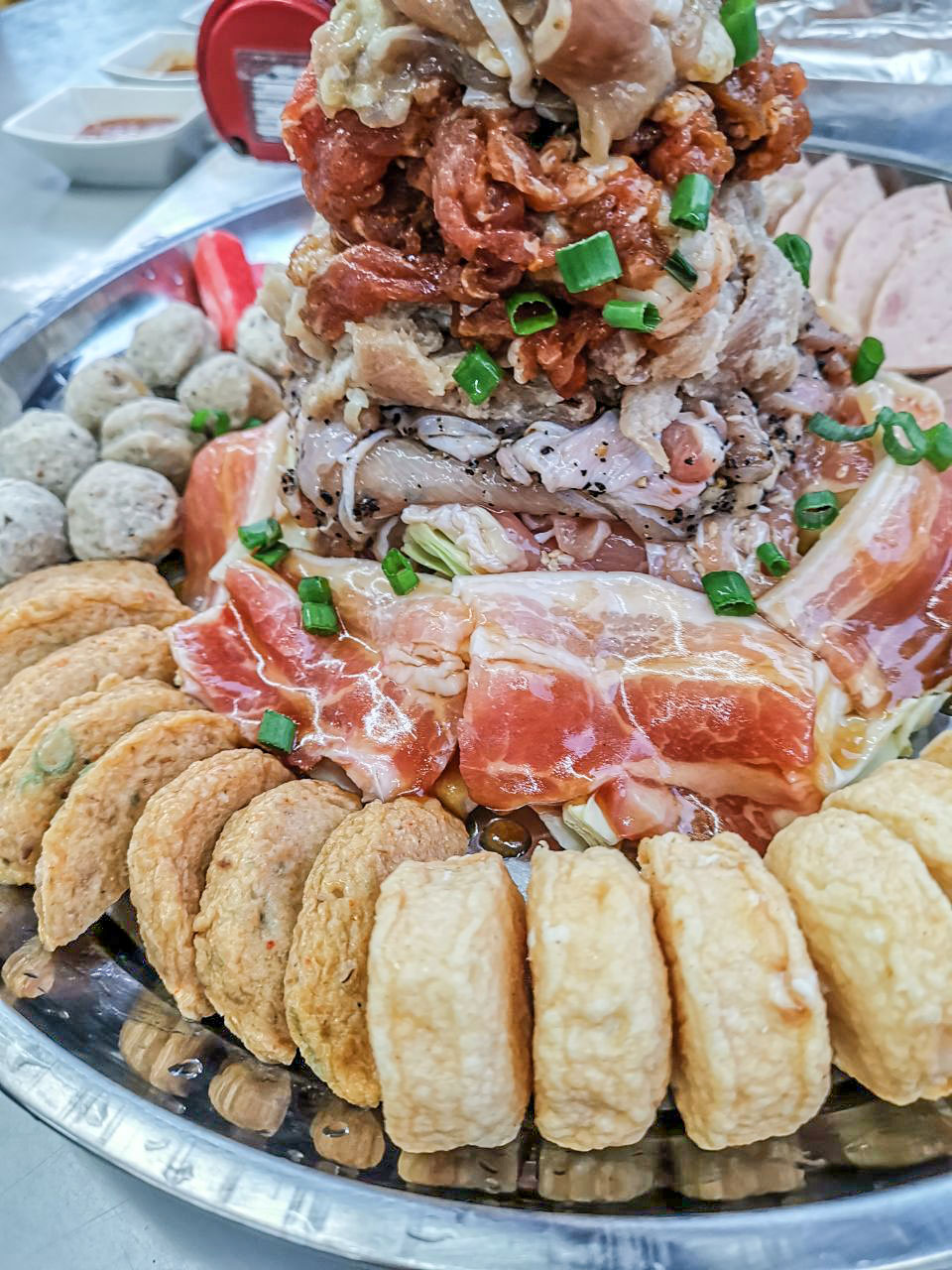 This was colossal, a glistening cornucopia of savoury delight just waiting to be devoured. We marvelled at the generous moat of Thai Fish Cakes, Hot Dogs, Meat Balls, Cheese Tofu, Crab Sticks and Luncheon Meat that bordered the great assortment heaped in the centre. The exclusive 1kg mountain itself was conceived collectively by cuts of XO Sauce Pork Belly, Garlic Pork collar, Sesame Chicken, Black Pepper Chicken, Green Curry Chicken and Tomyum Pork Collar. Completing the masterpiece was a soft bed of cabbage lining the bottom of the bowl.

On top of that, three types of chili sauce were provided to accent the meal. They ranged from being spicy on the left, to sweet on the right. I appreciated that there were various options offered as this would satisfy a group of friends with differing palates, leaving everyone more than content. 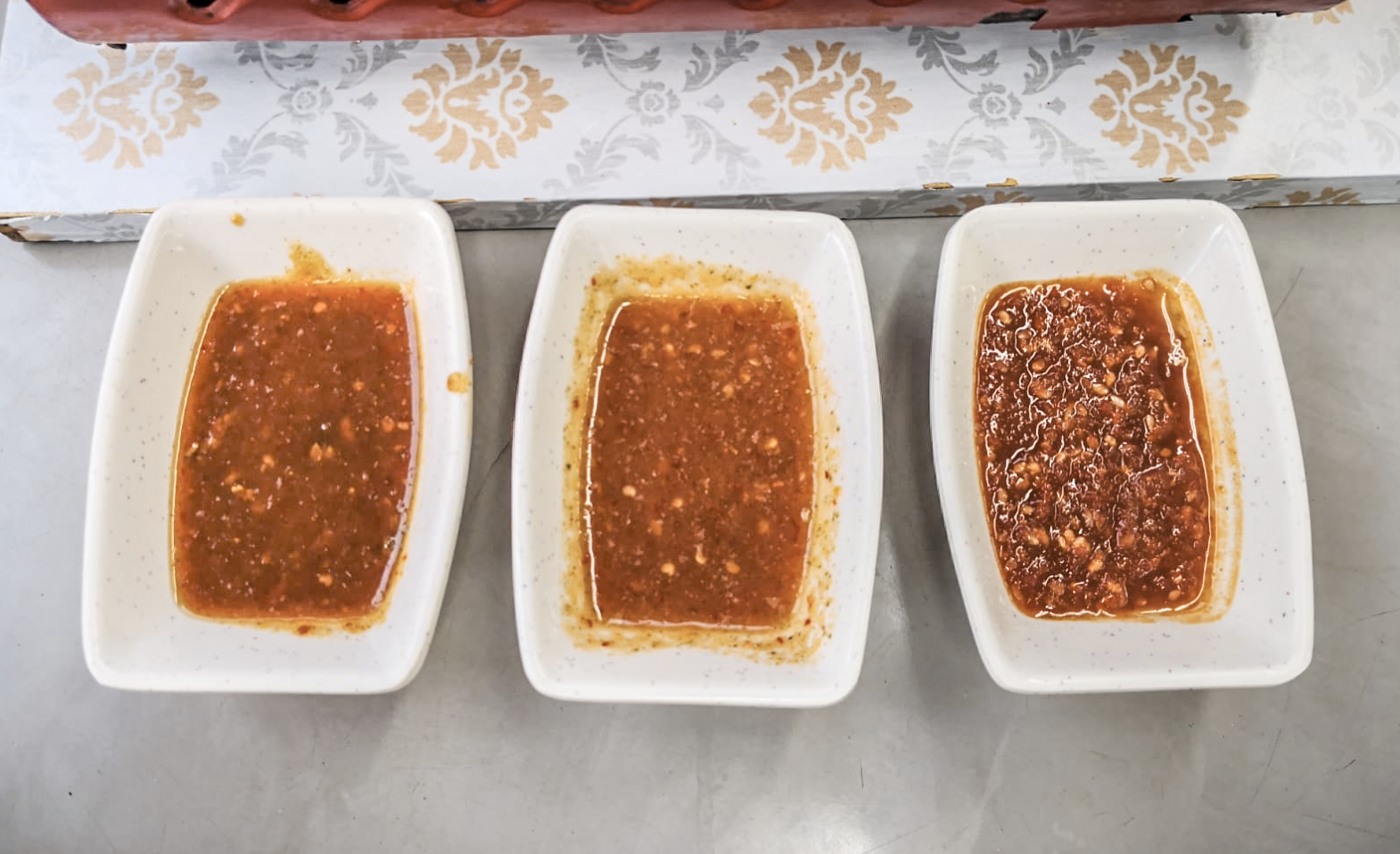 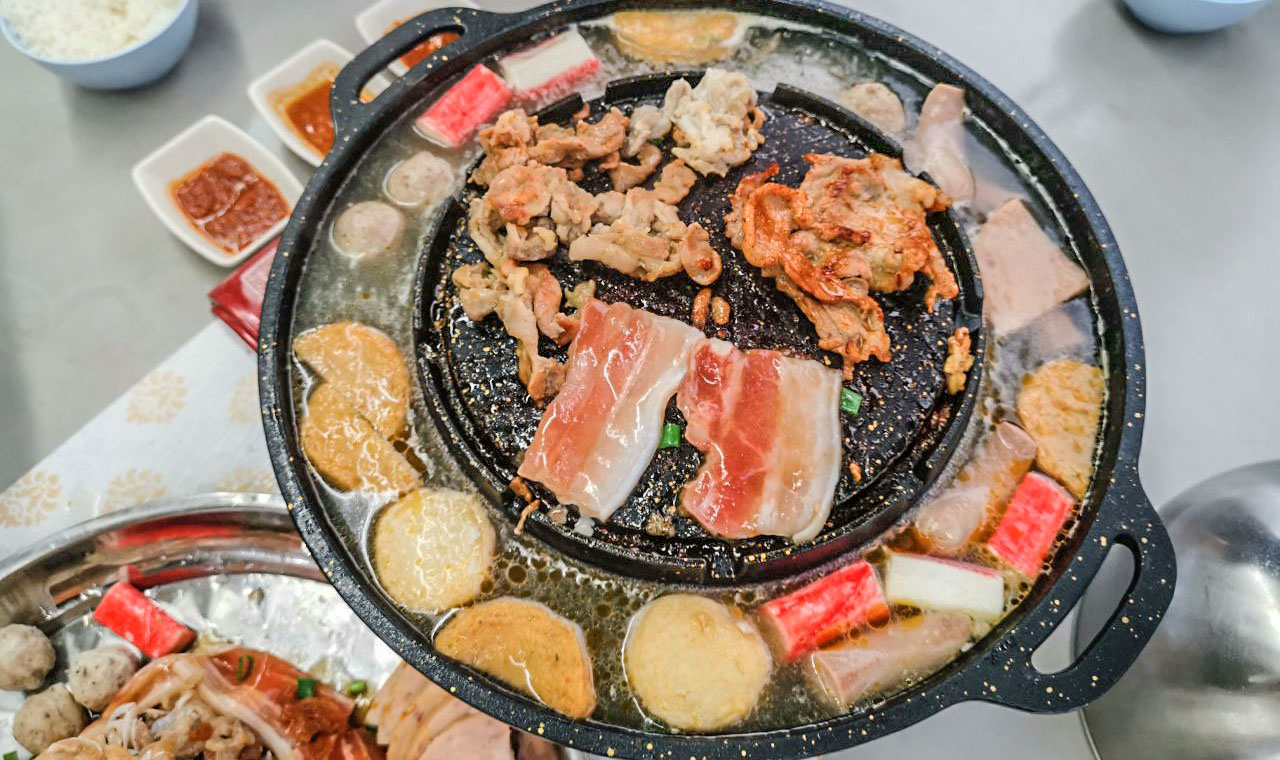 All of us came to the honest conclusion that we would have preferred the soup to be slightly less salty, although overall the meats were well-marinated and each type distinctly flavourful. Also, a pleasant surprise was that when we were about to leave, the stall helper hurriedly stopped us to grant complementary desserts. We baulked at the thought initially, as everyone was so full but before we could refuse, the bowls of Watermelon lime ice were already presented on the table. To our relief, they were just the right amount to grace the end of our dinner, saving us the struggle of stuffing our satiated stomachs! The chilly sips were few, but each one packed a sweet, tangy punch and contrasted wonderfully with the savoury foods consumed earlier. 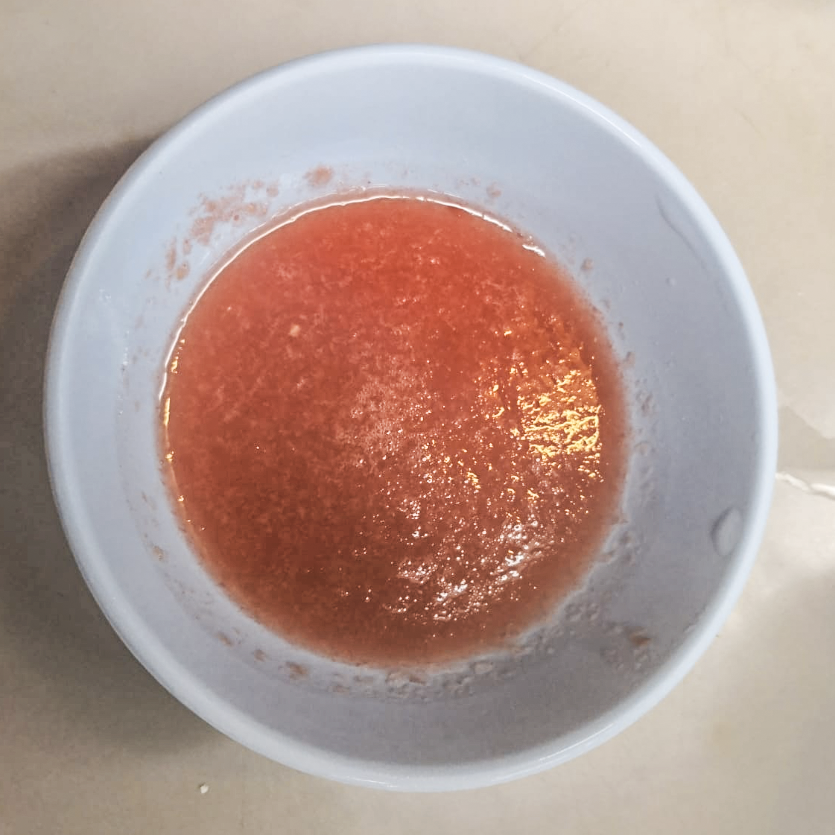 The photo above shows insufficient justice to its magnificently zesty taste. Do not be fooled or underestimate its seemingly plain and banal appearance—its truth will announce explosively on your tongue!

Overall, I have to commend Claw Mookata for its extensive selection of food and condiments, great customer service and generosity. They do not charge extra for sauces, soup refills or the mookata pot as some of their competitors might. I felt that it was worthwhile too that at $39.90, the four of us arrived with growling stomachs, but left feeling sated and happy.

Opens Daily: 5pm to 1am (Except closed on Tuesdays)