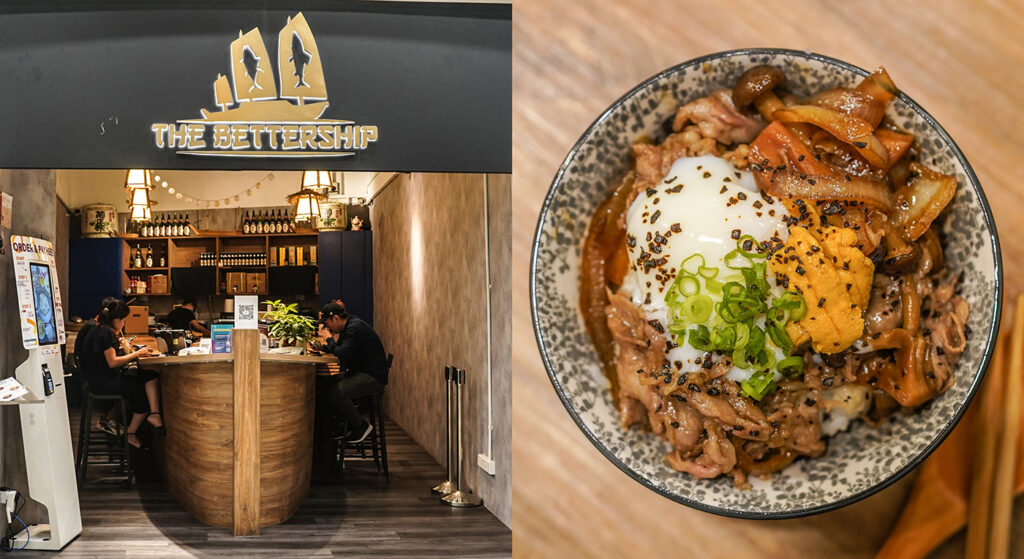 Started as a sashimi don restaurant with the entire venue shaped like a ship, The Bettership created a one-of-a-kind Omakase menu for its regulars. 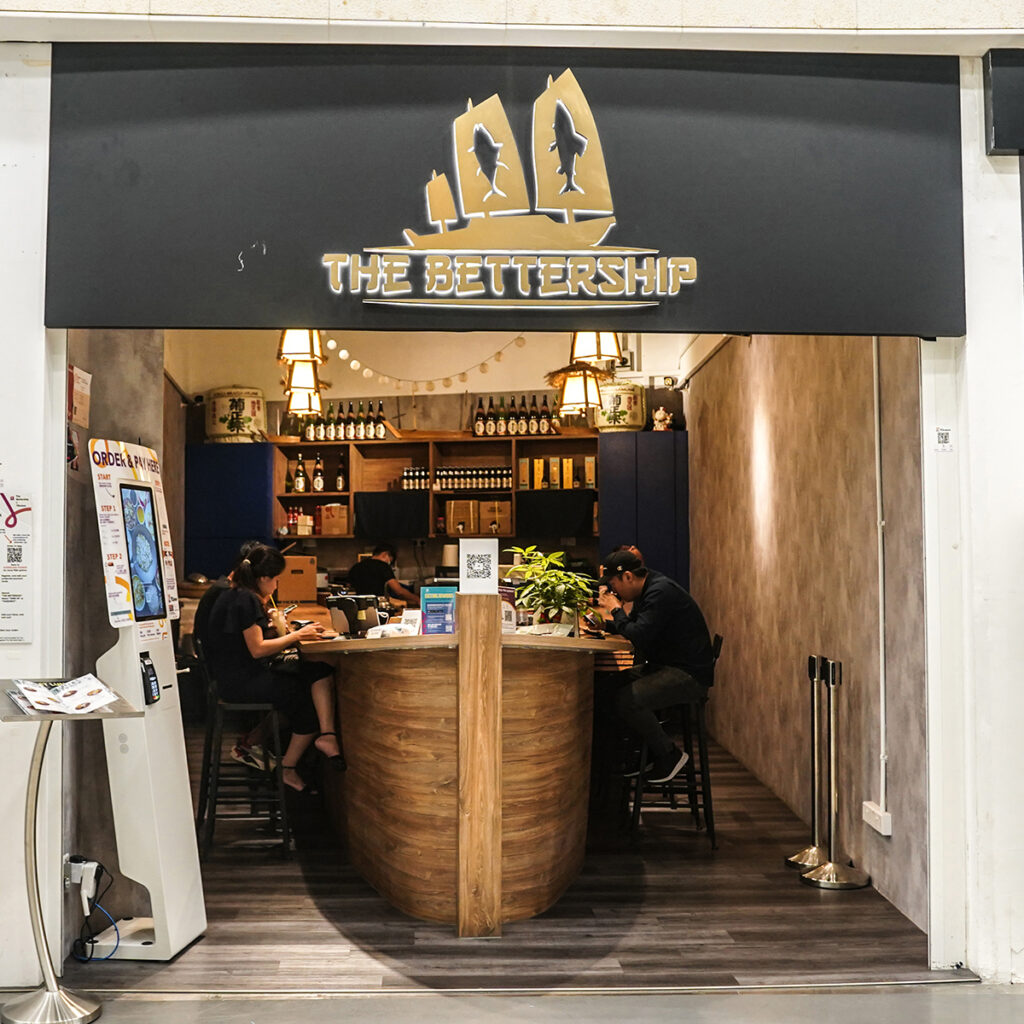 Priced at $100 nett, you will be in for a treat with six starters, a donburi, a soup and a dessert! Don’t say I never advise you – opt for the seats deeper within to witness Shaun (Chef and owner) perform right before your very eyes. Let’s get started! 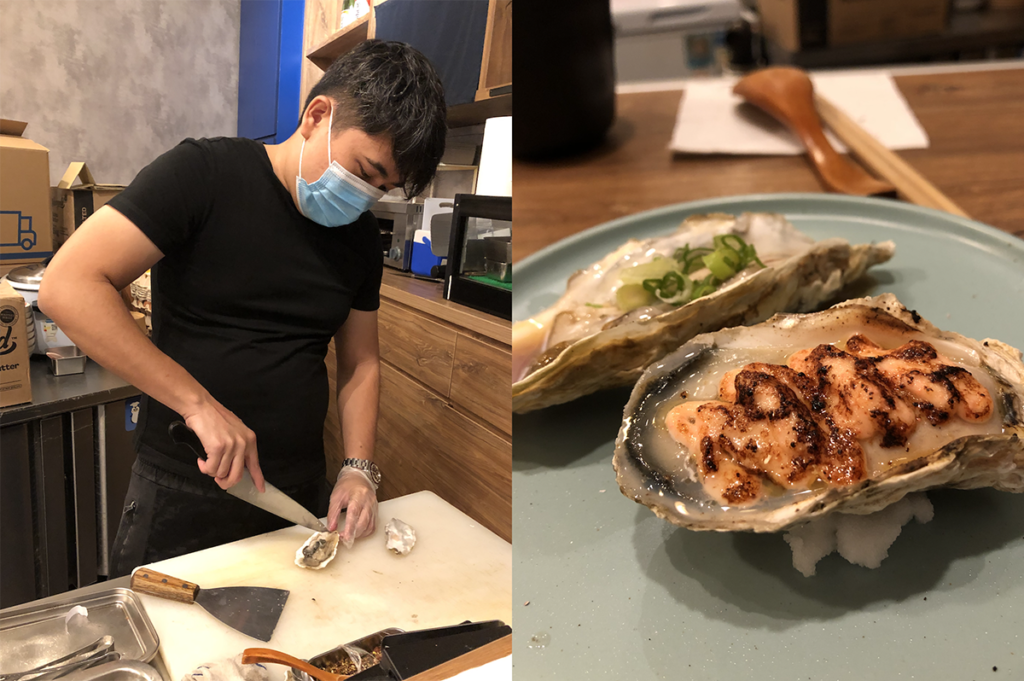 We had the honour to watch Shaun shuckle the oysters in front of us. Each pax was served with two oysters (I was only expecting one, so this was a pleasant surprise) – ponzu with spring onions and torched mentaiko! Boy, the oysters were so plump, juicy with no pungent aftertaste at all!

The spring onions gave a great crunchy contrast to the fresh oyster that was drizzled with Japanese ponzu sauce. My favourite of the two was the mentaiko oyster because the smoky creaminess from the house-made mentaiko sauce was just incredible!

While we started eating, Shaun proceeded to prepare the next dish – spicy scallops with seasoned jellyfish.

First, he diced the scallops and marinated them with tobiko, chilli oil and house-made spicy shoyu. Chilled seasoned jellyfish became the base of the dish where Shaun then scooped the marinated scallops in and topped the dish with nori strips. I mixed everything together and it was subtly spicy, savoury and so refreshing!

Kani Miso has always been considered a luxury ingredient in Japanese cuisine, so when I heard that we were having that next, I couldn’t wait! 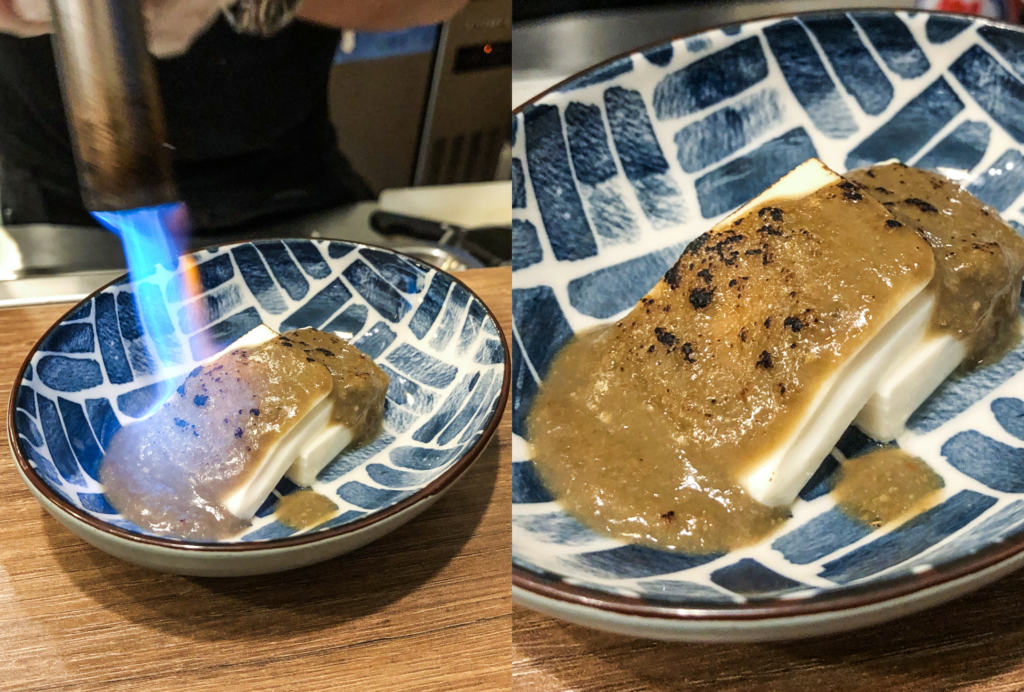 The kani miso was spreaded over two soft silken tofu and torched. Just looked at the aftermath! The surface turned into an icing-like layer and as if that was not enough. Wait for it.. 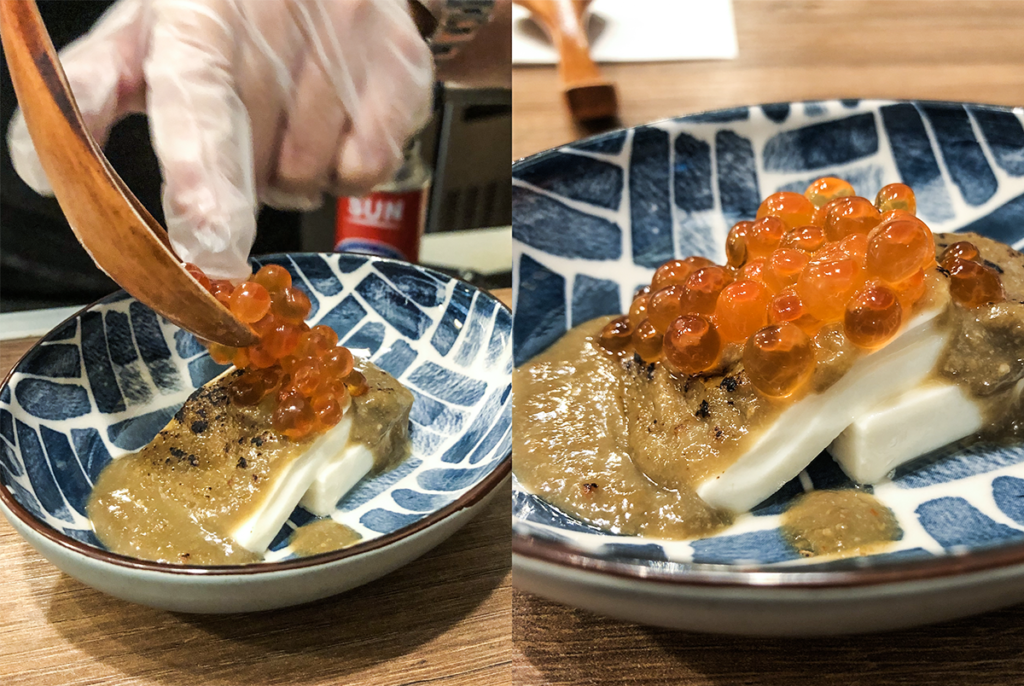 Shaun poured in a spoonful of hokkaido ikura as a finishing. My heart skipped a beat. Time to finally taste it! 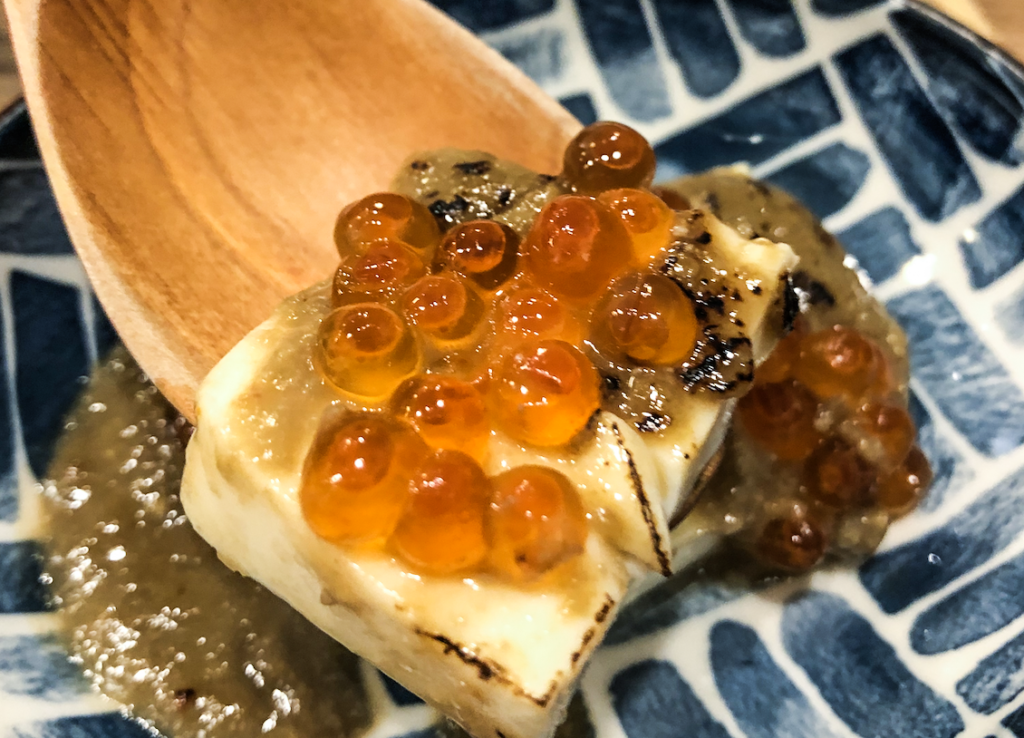 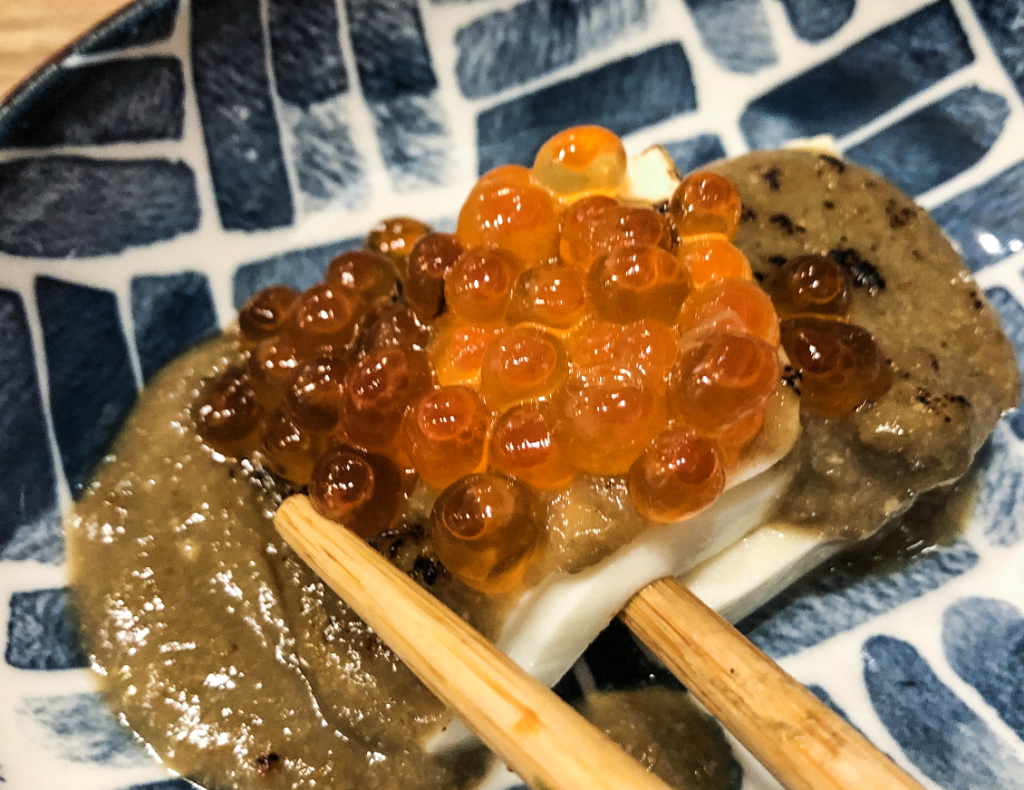 Although the silky silken tofu was very soft, it did not break easily. There were just so many sensations at my first mouthful. I understood why Shaun used silken tofu for this dish – the kani miso and hokkaido ikura were so flavoursome! Without much effort, the tofu disintegrated and the kani miso’s crabby roe flavour caught on immediately with a slight smokiness. The ikura burst within and blended well with the kani miso’s robust palate. Not a surprise when Shaun said that he had intentionally reduced the kani miso’s portion as some customers feedback that the kani miso was too overwhelming.

Our 4th dish was truffle somen (didn’t expect a noodle dish as there was already a donburi on the menu) which was totally unforgettable. 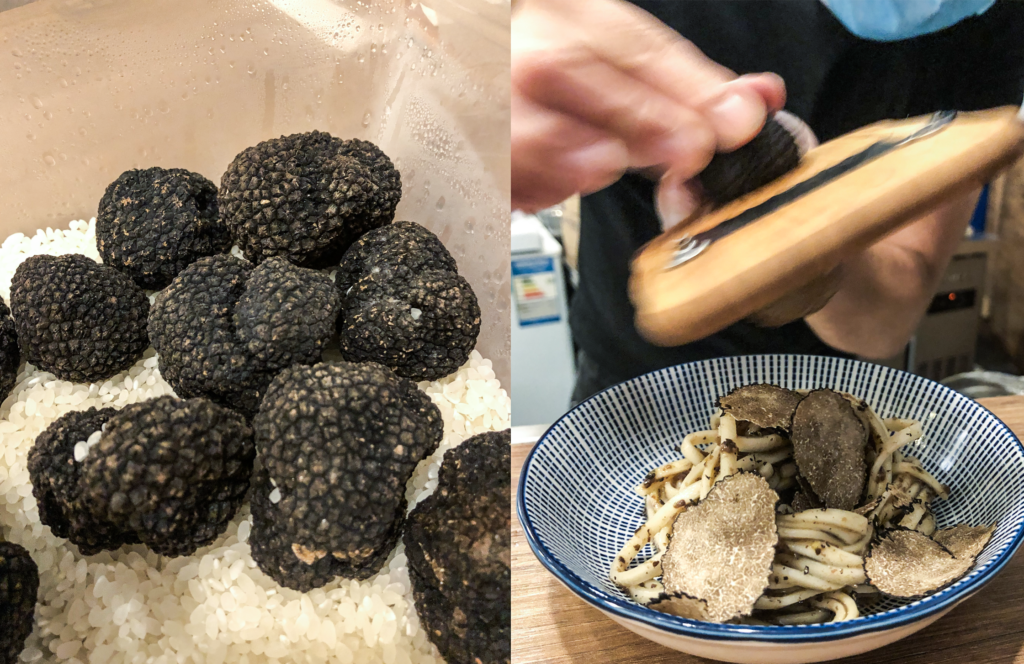 I saw Shaun boiling, rinsing and finally chilling the noodle which slowly expanded to a linguine size. He went on to dig out salsa con tartufo (a type of truffle paste made from wild mushrooms, black olives and summer truffle). After giving a thorough mix with the thick somen, Shaun shaved even more black summer truffle! I felt like a king in that instance. 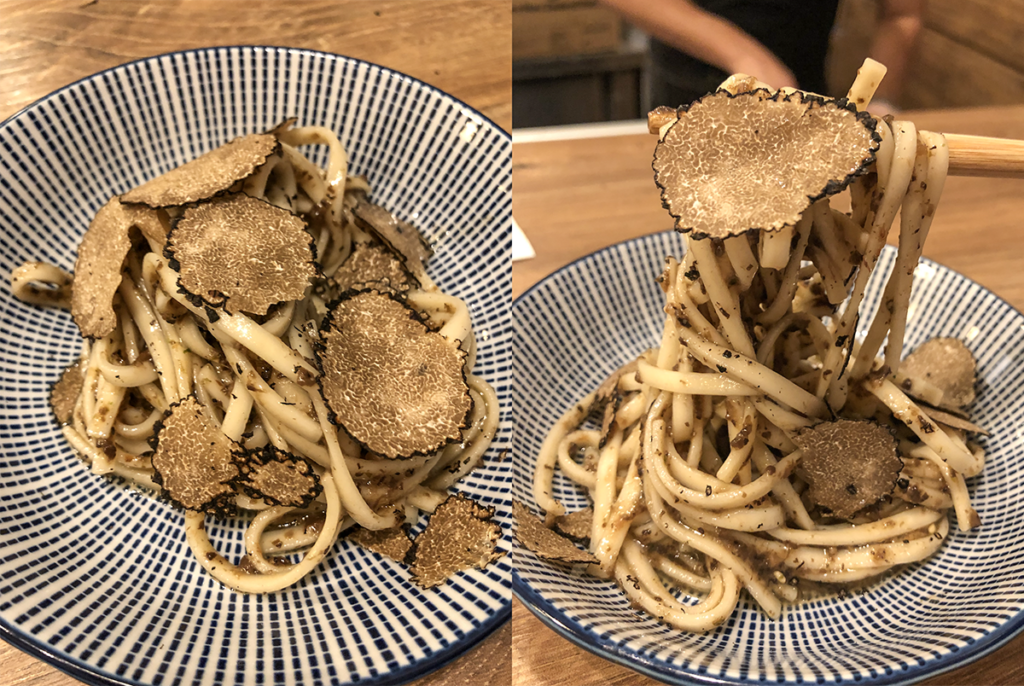 True enough, the earthiness of the truffles coated every strand of somen. There was an abundance of aroma and fragrance and the cold somen which prevented you from stopping because it was so so soooo appetizing.

And the last cold dish of the starters has to be sashimi!

Today, it was salmon belly and otoro! Seeing Shaun skilfully slicing the slab of raw fishes, I salivated even more. As expected (just like his famous sashimi dons), I was not disappointed. Salmon belly was silky smooth and naturally sweet, it got even better with the japanese soya sauce & wasabi. I couldn’t even bear to touch the otoro because of its insane marbling. Glossy and fatty, it wasn’t too sweet yet it was extremely juicy! Wasabi and the soya sauce enhanced the overall sweetness even more. It was the truest form of joy on my taste bud. 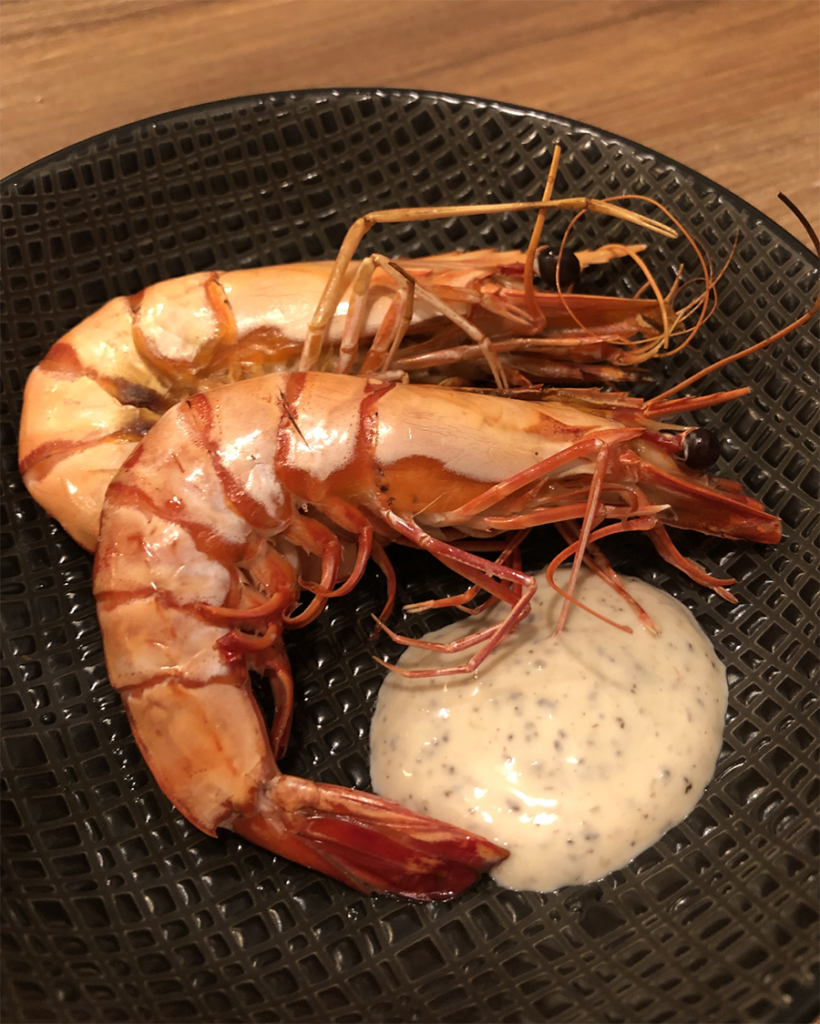 By now, I couldn’t belittle The Bettership’s sauces. Shaun is a master of house-made sauces and the truffle cream was one of my favourites! Live prawns were first baked before Shaun sprinkles a pinch of salt on each layer. No oil was used at all, so what I experienced was pure sweetness from the fresh prawns. 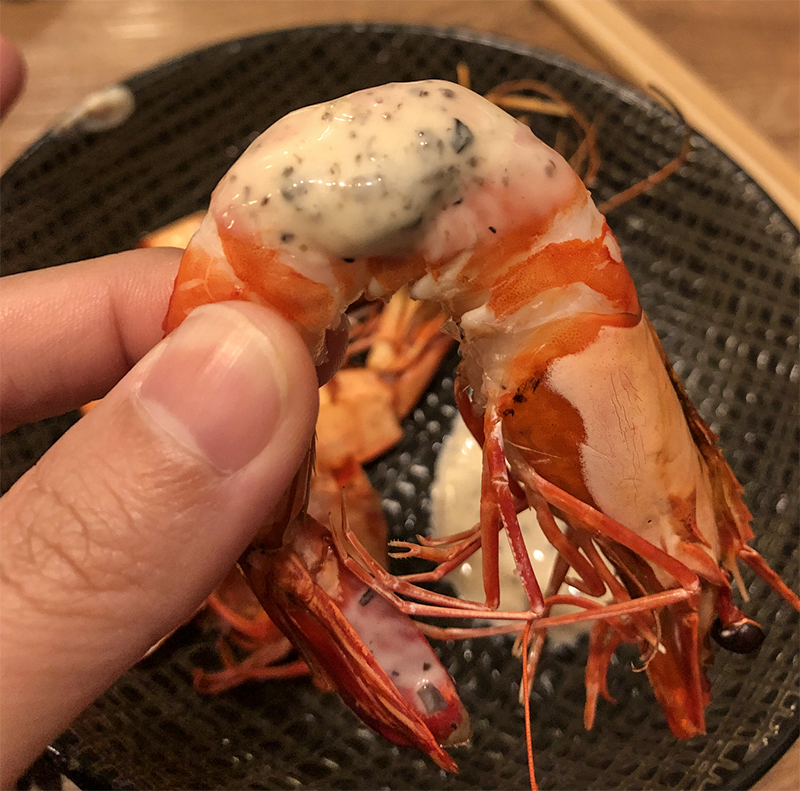 But when I paired the prawns with the truffle cream, I never looked back. The house-made cream was crazily addictive because of its savoury and robust flavour. I wished I could have the cream as a side sauce for the rest of my meal.

A5 Wagyu Don with Ginjiro Murasaki Grade A Uni 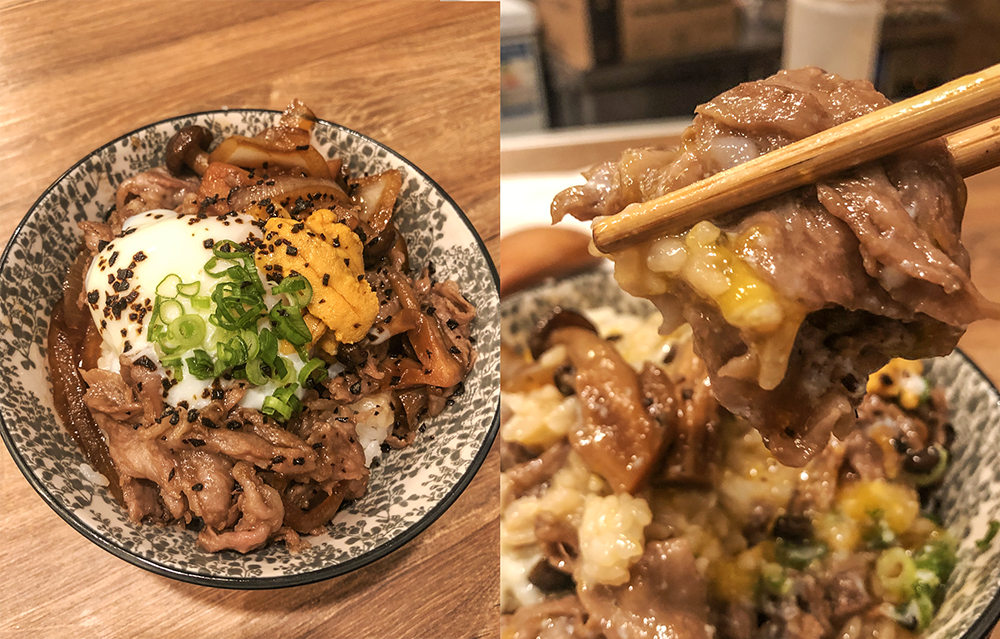 As with every main in an Omakase menu, it usually is the star of the show. At The Bettership, there were many to look forward to at this point. First, it was the thinly sliced Sukiyaki Wagyu A5 Striploin that had been shabu-ed in the house-made garlic shoyu broth. With a decent layer of fats around the edges, the glorious beefiness emerged easily with shimeji mushrooms and sauteed onions. The runny onsen egg gave additional moisture to the Japanese short-grain rice which had been drenched with house-made garlic shoyu too!

Shaun shared that he lived by his self-created garlic shoyu and added almost anything with it. Well, that just made me even more interested in how great that sauce is. 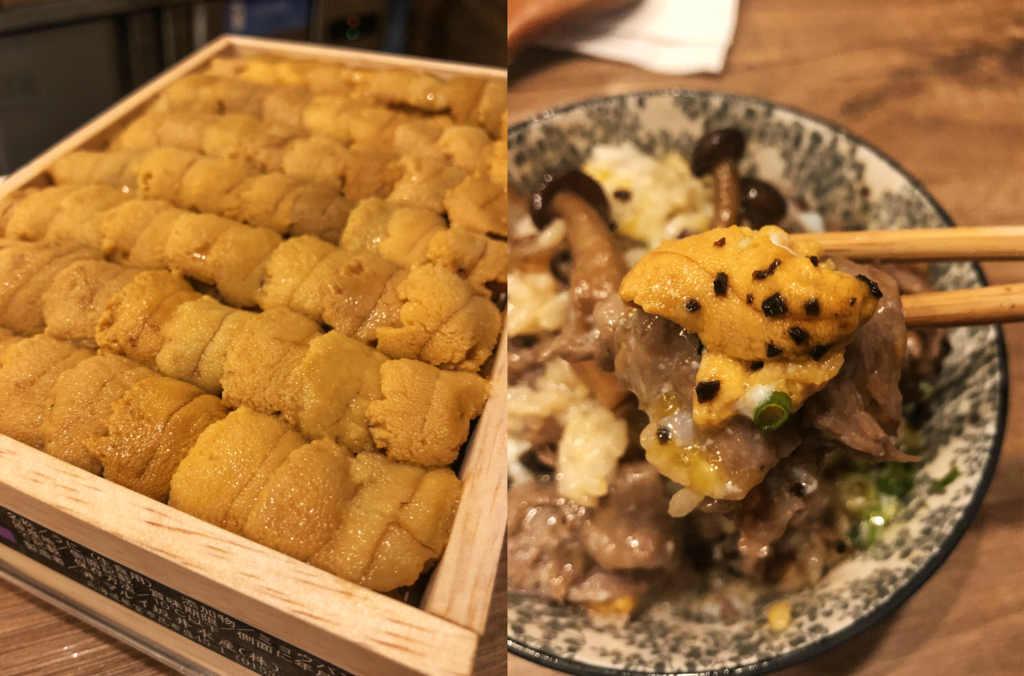 And as if those were not enough, the donburi (omakase’s latest addition) was topped with 銀次郎のむらさきうに (Ginjiro Murasaki Grade A Uni) which was flown in directly from Toyosu Market in Japan. Shaun revealed that this was only available for a limited period only.

The shiro-miso soup was simmered with relatively huge white clams and kombu. 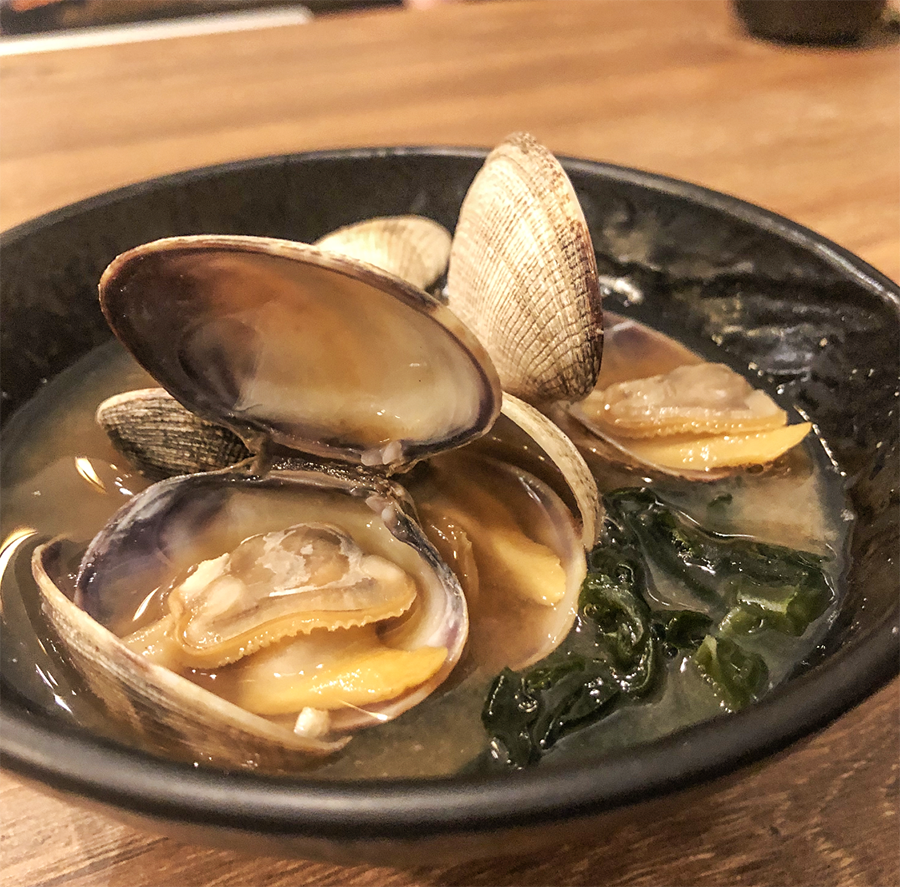 My first sip of the soup was unbelievably flavoursome, as if it was a seafood soup. The plump clams still retained their own original sweetness despite contributing its own flavour into the soup. What a delightful bowl! 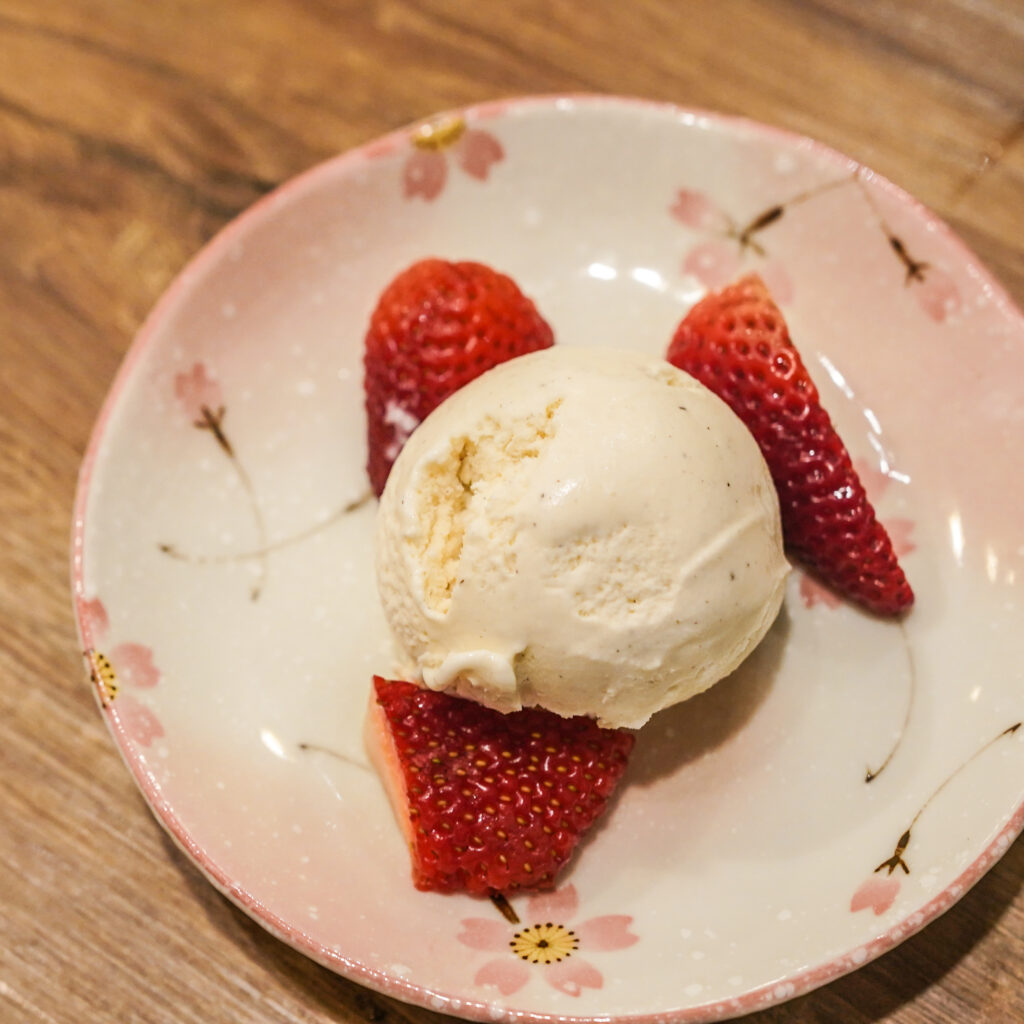 The pairing of the sweet ice cream and tangy strawberries were a great match and awesome end to the meal.

To be honest, Shaun tastes almost every ingredient before using it to ensure its quality. And that day, the mango that was supposedly used for the dessert was not at its prime yet, thus he didn’t include it. But this gave me assurance and confidence that he knows what he’s doing and will only serve the best to his diners. 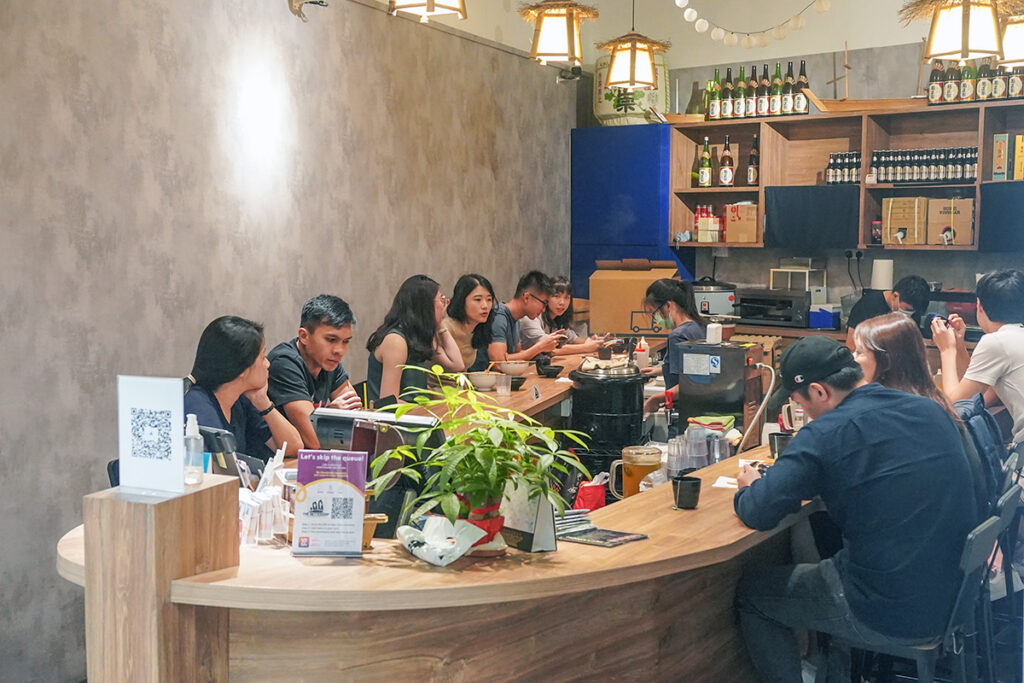 Overall, I am extremely satisfied (and happily full) from the meal. $100?

Damn worth it, please! Shaun who was very approachable also significantly lifted up the atmosphere as well as educated me very thoughtfully on the Japanese omakase experience and ingredients used. During Phase 2, social distancing required all F&Bs to abide by the 1m rule, so The Bettership is no exception.

Therefore, do remember to make reservations in advance (even during weekday lunch time) unless you can withstand waiting for close to an hour for walk-ins!