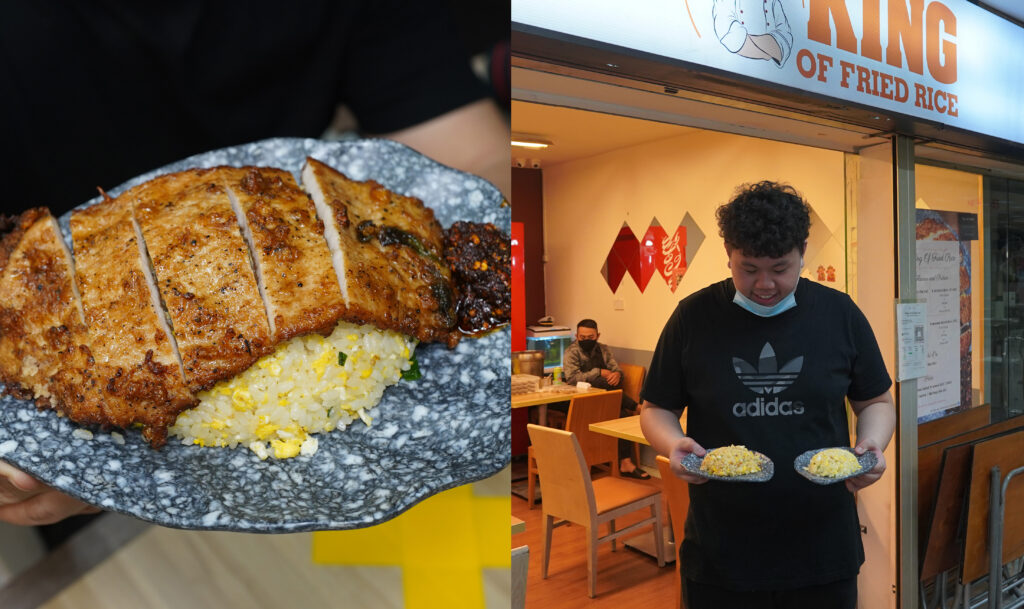 Fried rice is a staple dish that can be found in nearly every corner of Singapore, but did you know that there is a self-proclaimed ‘King of Fried Rice’? This is a title that holds great promise, so we wanted to find out for ourselves if what it whips up really honours its name. I was told to visit during off-peak timings because apparently, queues could accumulate into wait times of 1-2 hours!

Not about to risk this, we quickly made our way down and were seated by 12pm, 30 minutes after they opened their shutters for the day. Lo and behold, tables were already beginning to fill up!

Located in the basement of Golden Mile Tower, Fried Rice King would have merged discreetly into the assortment of eateries on the same floor if not for the crowds that were beginning to occupy its premises.

Their Fried Rice came in 4 flavours: Egg, XO, Tom Yum and Mala, all which cost only $4! 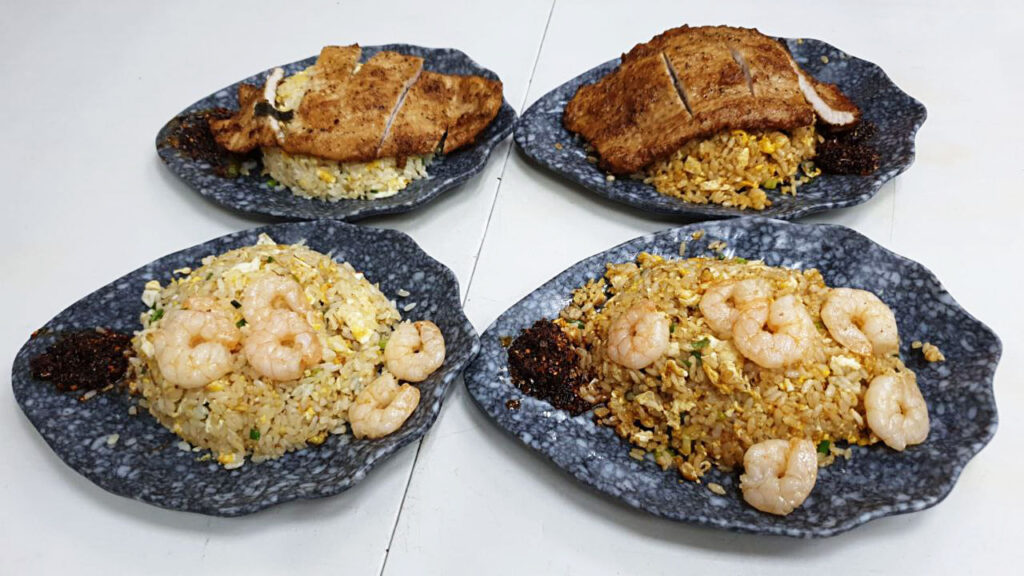 Every one came with the option of adding either prawns or a pork cutlet for just an additional $2.80. If that isn’t enough, you can further enhance the meal with a $1 serving of Tobiko. Price wise, this was undoubtedly affordable, but whether it could sate our taste buds was the true test it had to ace. 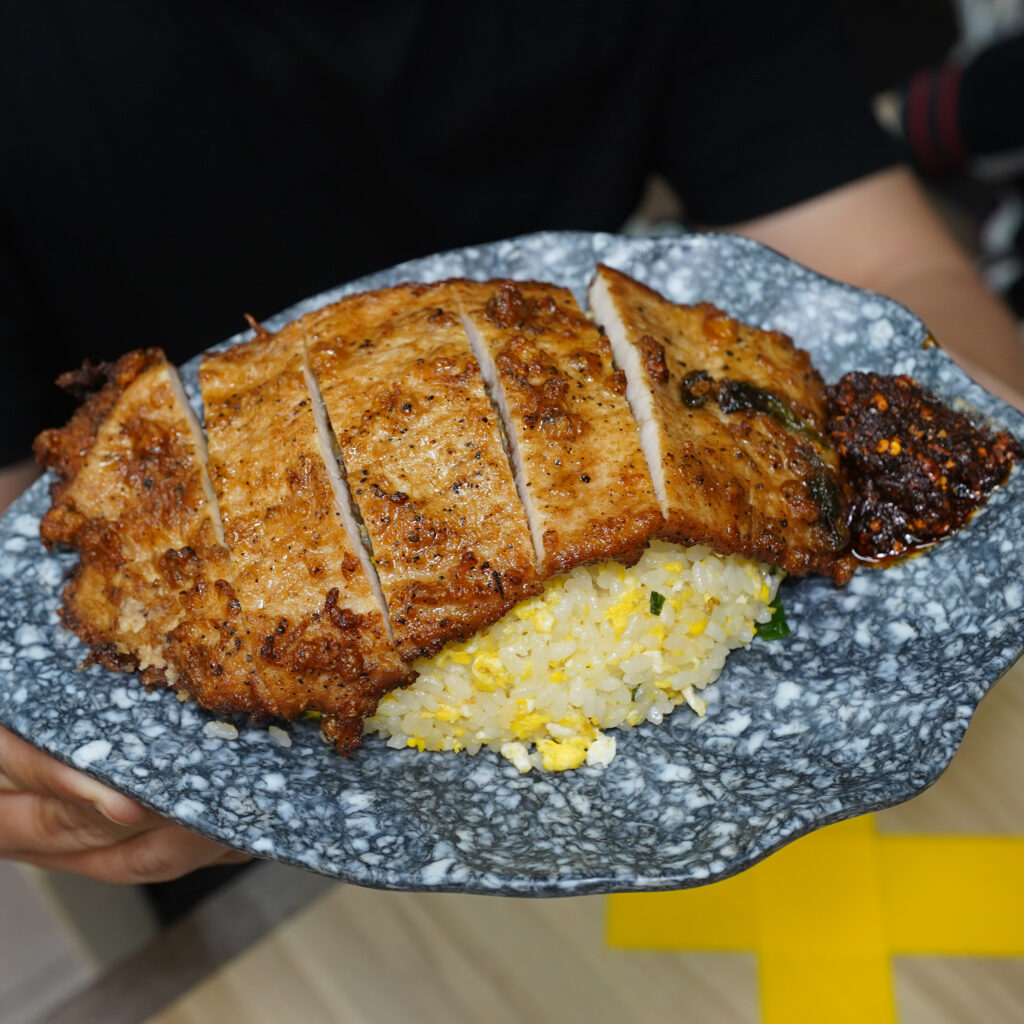 Despite being the most basic option on the menu, this was an aromatic treat! The gentle essence of the fried egg complemented the subtle fragrant flavour of the bouncy rice grains. Although the wok hei taste permeated deeply into the rice, it wasn’t overpowering, which I felt was a skilful feat. Kudos to the chef!

The pork cutlet was surprisingly soft, with an outer layer of caramelised sweetness that added dimension to its savoury flesh.

Simple meals might be easy to prepare, but being able to execute one perfectly is a form of mastery.

Personally, I loved every bite of this. The Tom Yum flavour added a unique oomph to the already delicious rice– those with a penchant for Thai food should opt for this variety. Each grain of rice carried along with it the unmistakable sour tang synonymous with Thailand’s popular dish!

That aside, the prawns were a wonderful addition. Juicy, fresh and springy, they are testament enough that Fried Rice King takes pride in every detail of what they serve to their patrons! 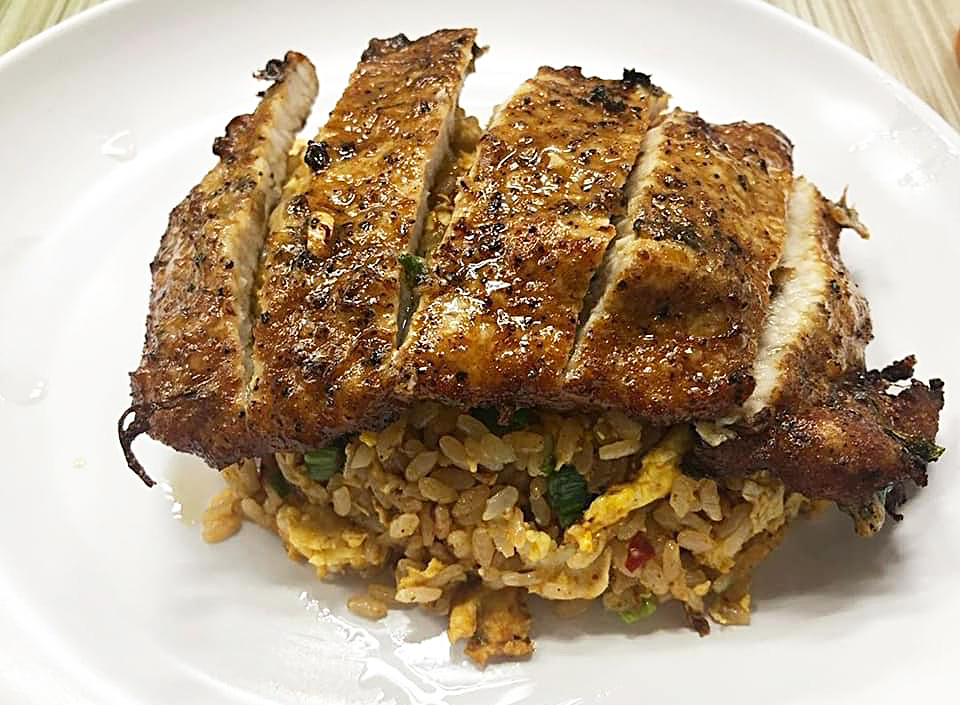 Out of the four, we came to the conclusion that the Mala and Tom Yum Fried rice were the most unforgettable. Amidst the slightly orange-tinged rice grains, we could see that it had been fried with chilli slices, eggs and spring onions to create a Sichuan-style spin to the flavour. The mouth-numbing quality Mala has been made famous for wasn’t too overbearing either. This allowed the rest of the dish to shine through, making for a well-balanced delight.

That said, let’s not forget about the self-serve chilli oil! Their homemade recipe was a fantastic blend of peppery, spicy and nutty goodness. My brother, being a chilli oil fanatic, reported that this wasn’t too fiery and in fact, more umami and nutty. However, he underestimated it by heaping an entire spoonful into his mouth, slowly turning red as the heat spread across his palate.

No matter how tantalising, moderation is always key regardless!

Somehow, this didn’t really capture the nature of the XO sauce. To me, it seemed more reminiscent of salted fish fried rice. Regardless, it was still a very pleasant gastronomical experience that we all enjoyed.

The only gripe that we had was that the food was a tad oily for our liking, but then again, what’s fried rice without a bit of grease? Our verdict was hence a resounding YES, that King of Fried Rice’s crown was one well deserved.