Within the hawker establishment at 473 Fernvale Street is a stall that contrasts against its run-of-the-mill peers. 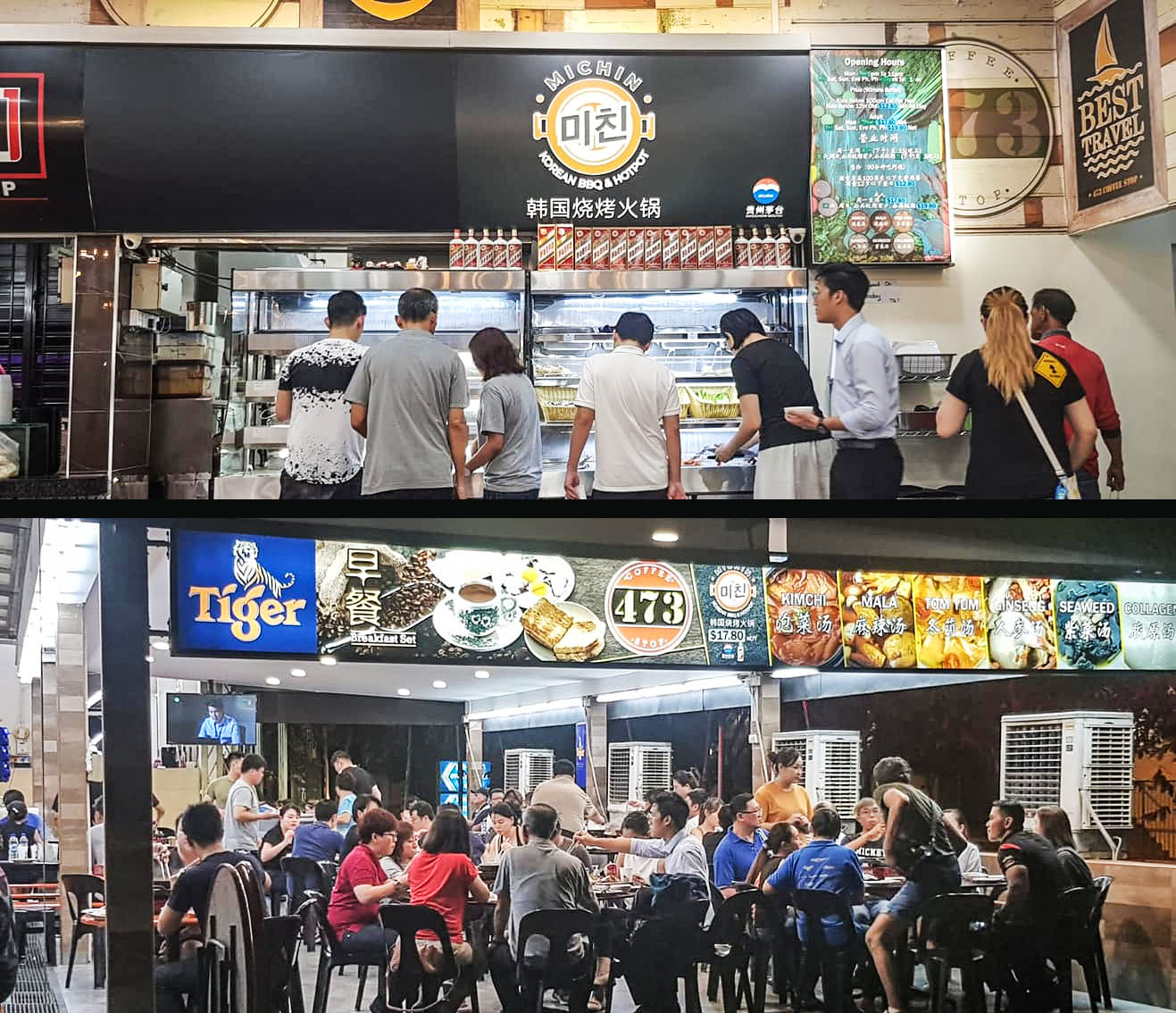 Michin is a Korean Hotpot BBQ Buffet humbly rooted in the heartland, with prices as unbeatable for value as it is delicious! At just $17.80 per adult on weekdays, while on weekends and public holidays the price tag increases slightly to $19.80, pamper yourself to a limitless slew of vegetables, seafood and prime slices of meat. Although we arrived on a Friday evening which also happened to be National Day, the vicinity was hardly packed, which made for a roomy, relaxing atmosphere. 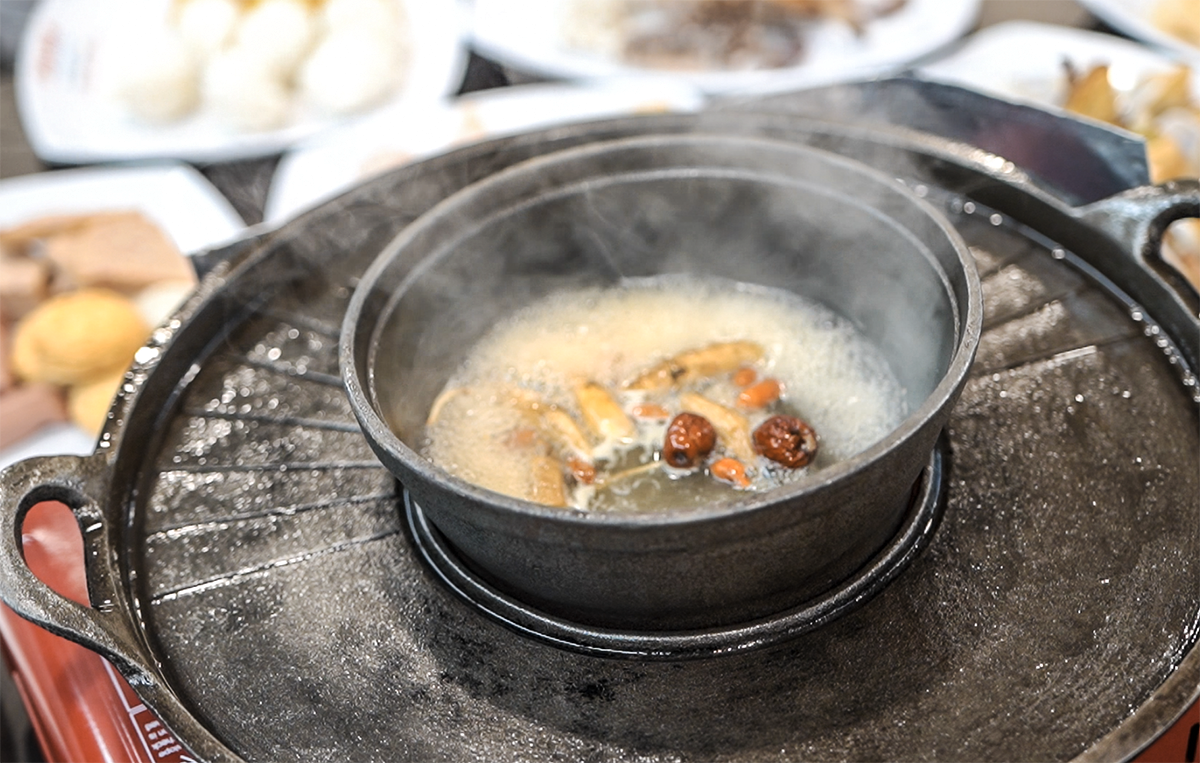 From six choices of soup bases, we decided on ginseng as we were fans of its aromatic essence and felt that it would be suitable for drinking as well. The others such as Kimchi or Tom Yum would be too overwhelming in taste to be consumed in that manner!

Once the grill and its accompanying pot was brought to our table and set alight, we headed to the buffet selection for perusal. I was immediately impressed. For a less than $20 per person, entitlement to free flow fish, scallops, along with an assortment of beef and pork cuts was nearly unbelievable. Excitedly, I carried back plates heavily laden with ingredients so we could begin chowing down and see how reality scored against expectation.

There were four categories of chicken, namely Black Pepper, Spicy, Garlic and Shoyu. All of them were tasty, bursting with flavour and cooked to a tender, juicy texture that was satisfying to sink our teeth into, but personally the Black Pepper one left an outstanding impression. It never held back, exploding in my mouth and showering every taste bud with zesty delight. 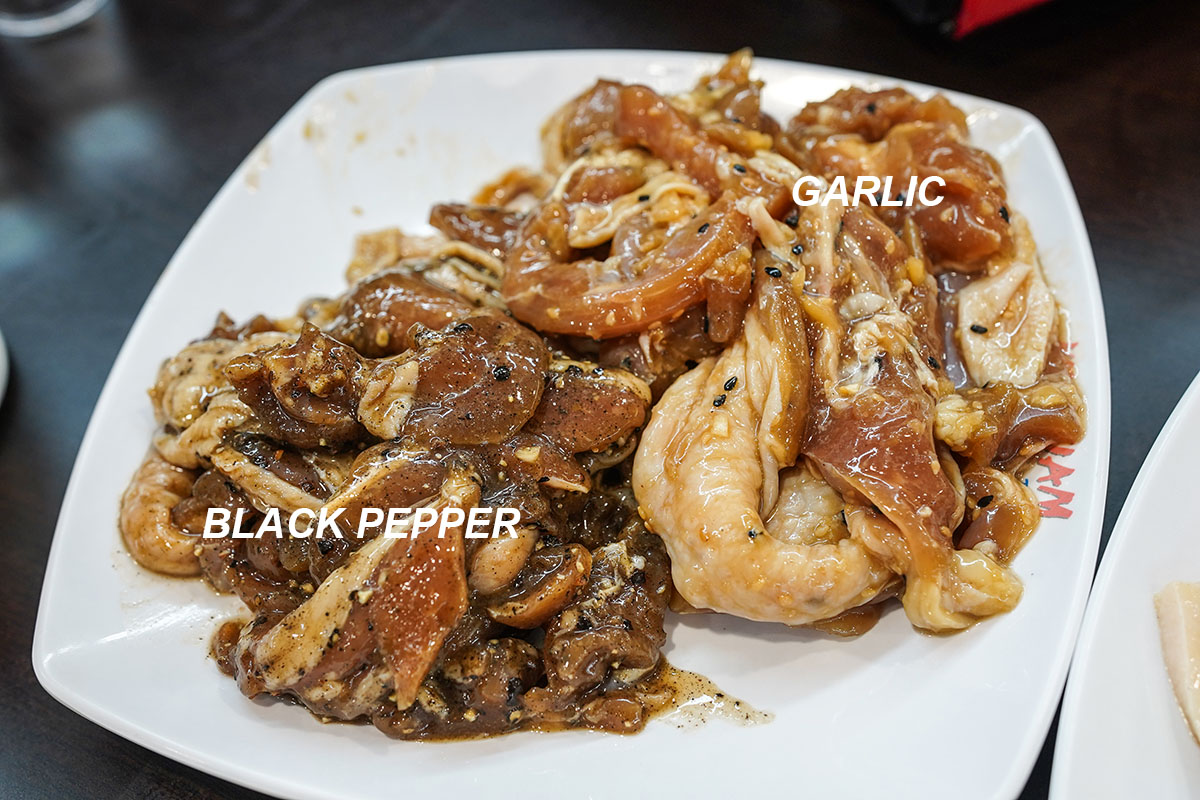 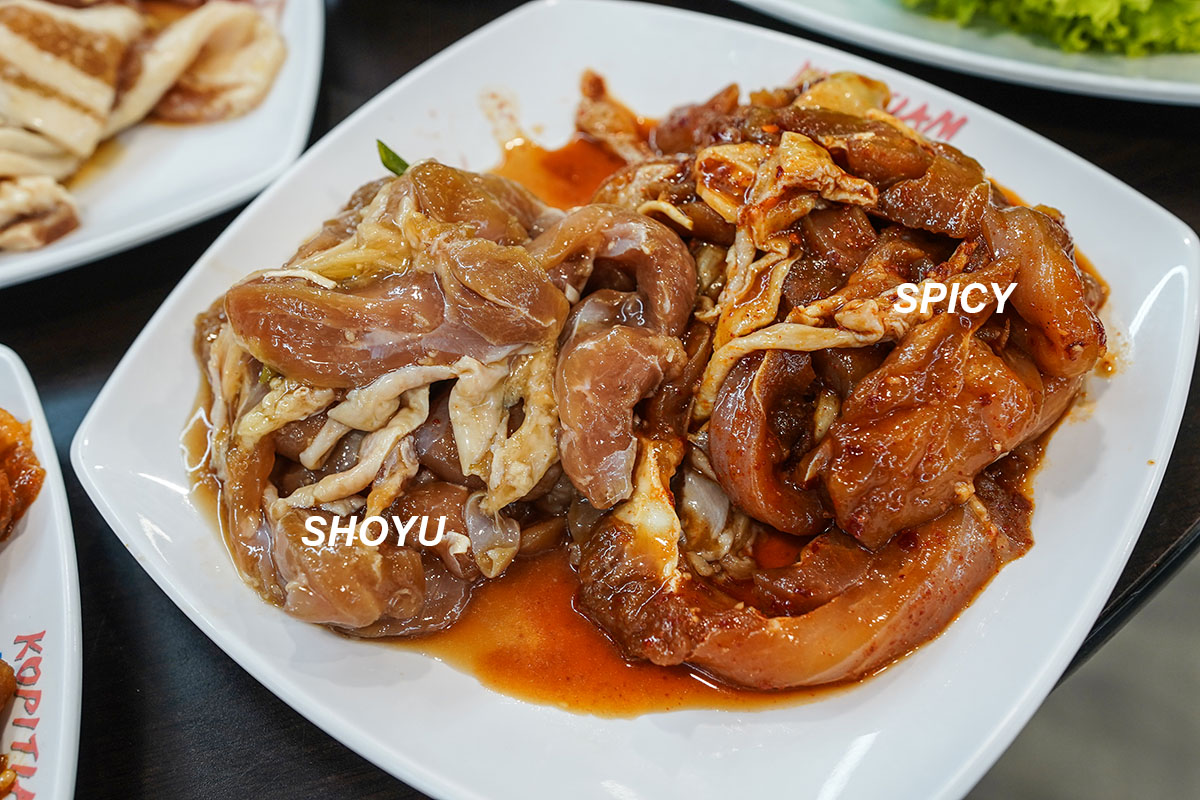 The Spicy chicken packed a thoroughly infused Kimchi tang which wasn’t too overpowering, yet distinct enough to make a statement.

Next in line that was whisked from the sizzling grill to my lips was of the Garlic variety. It emanated a mildly sweet, balmy scent that gratified my palate.

Last was the Soyu chicken; simple, yet full of umami goodness! 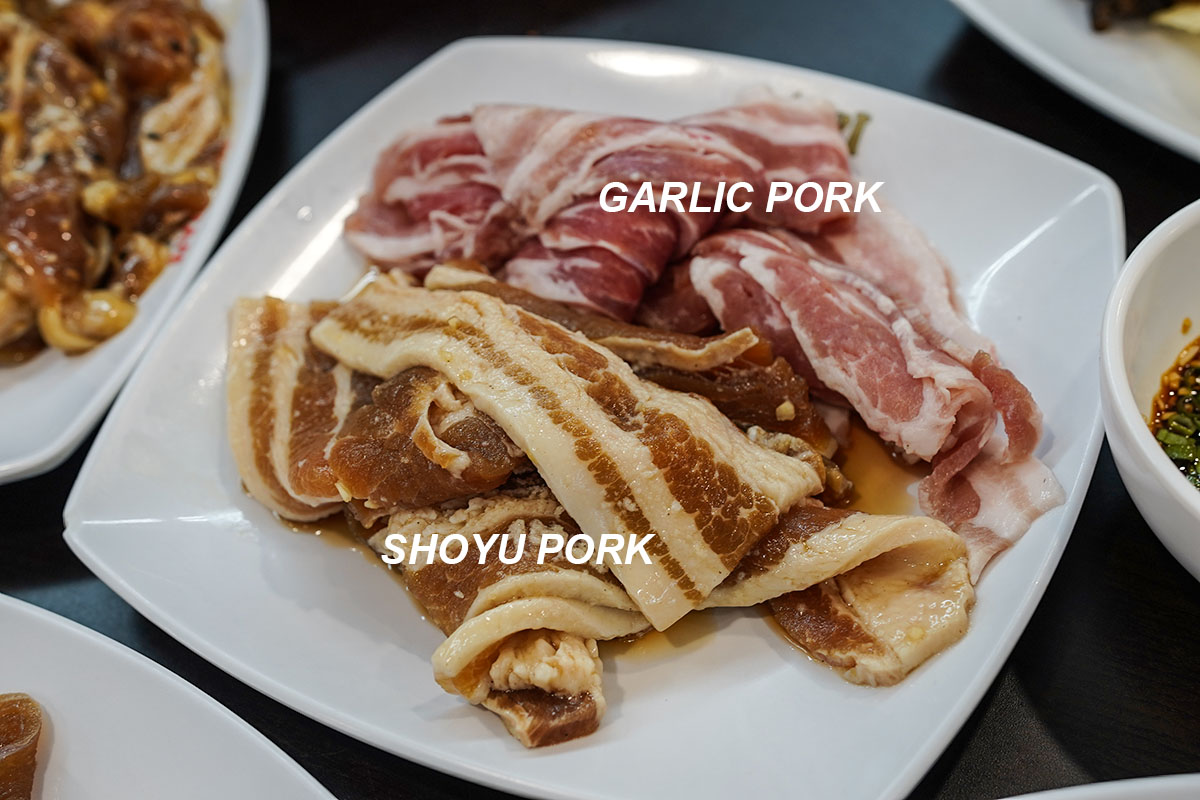 Bacon lovers would happily ravish the Pork Belly, which were generous long strips of meat that crackled and curled into smoky, crispy swirls. Like the chicken, there were also Garlic and Shoyu pork, both of which were equally as well marinated as their poultry counterparts. Note that there is no need to grease the grill further, the lard is really more than sufficient in providing that when heated! Being health conscious, we tried to contain our consumption of the sinful selection despite the allure. Oily, but very mouthwatering nonetheless.

This offered the smallest diversity– there were only Garlic and a rather vague ‘Marinated’ beef. Both lived up to the standards set by their predecessors: well-seasoned, succulent and boasting ideal firmness, branding every bite as an extremely sensual affair.

An unexpected surprise came in the form of the fish 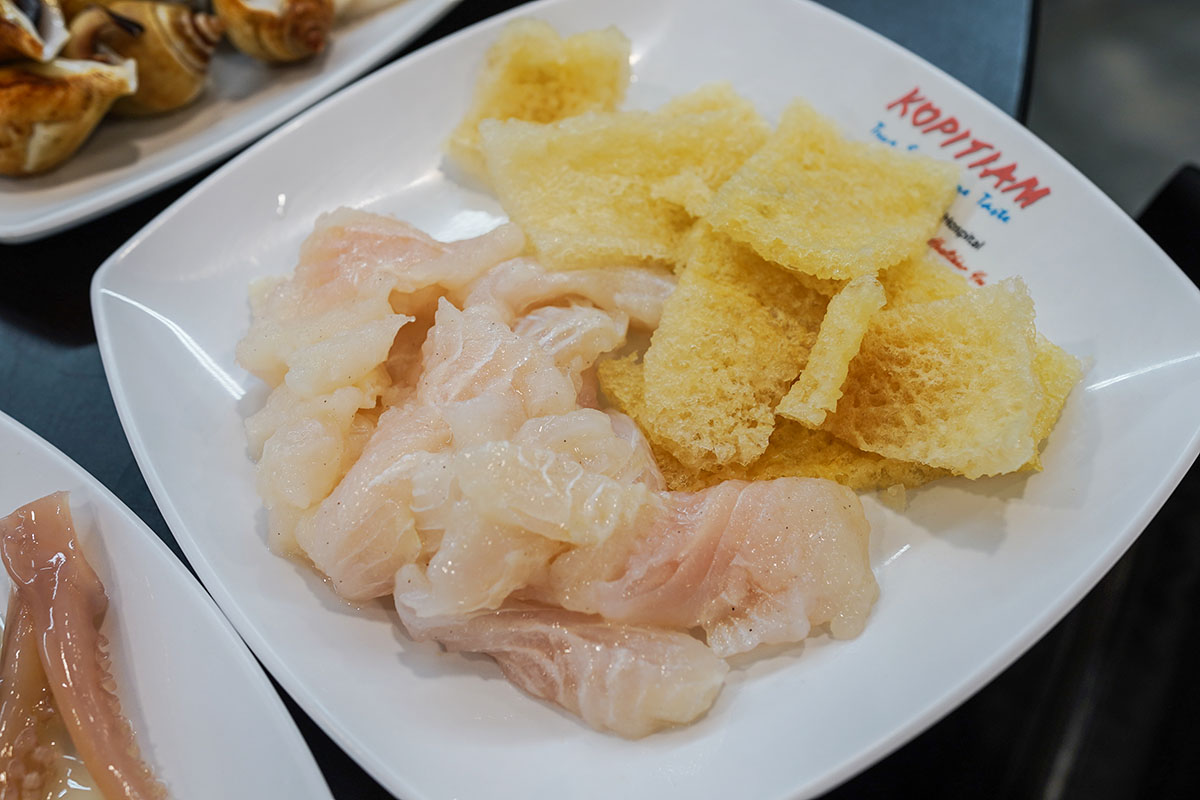 I was honestly fooled by its banal appearance, but slipped pieces of the white flesh into the pot anyway. The result was a soft, savoury treat that melted in my mouth. Hooked, I couldn’t help but rush back to the buffet counter to grab more. Another favourite were the scallops. Unlike the stringy, shrivelled kinds found commonly in spreads available at other eateries, these ones were plump and chewy.

Apart from these, choices of baby cuttlefish, clams, mussels and prawns were what comprised of the entire seafood collection 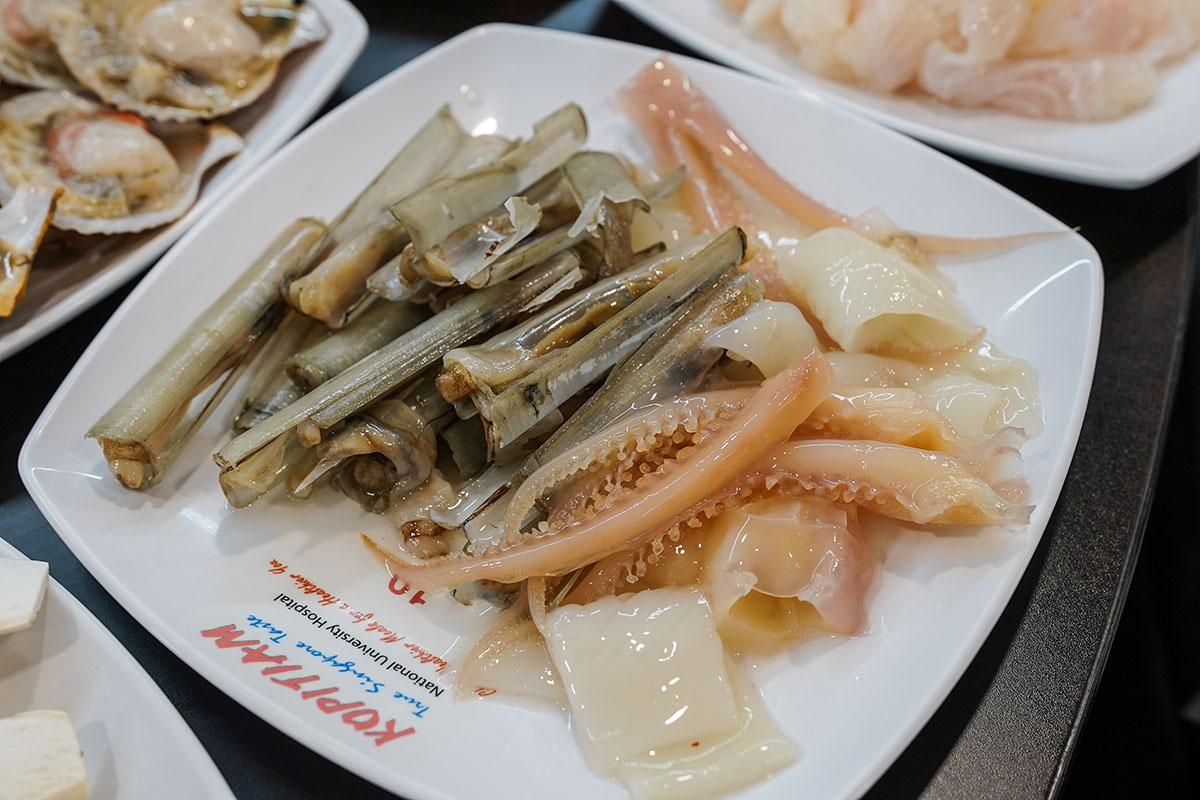 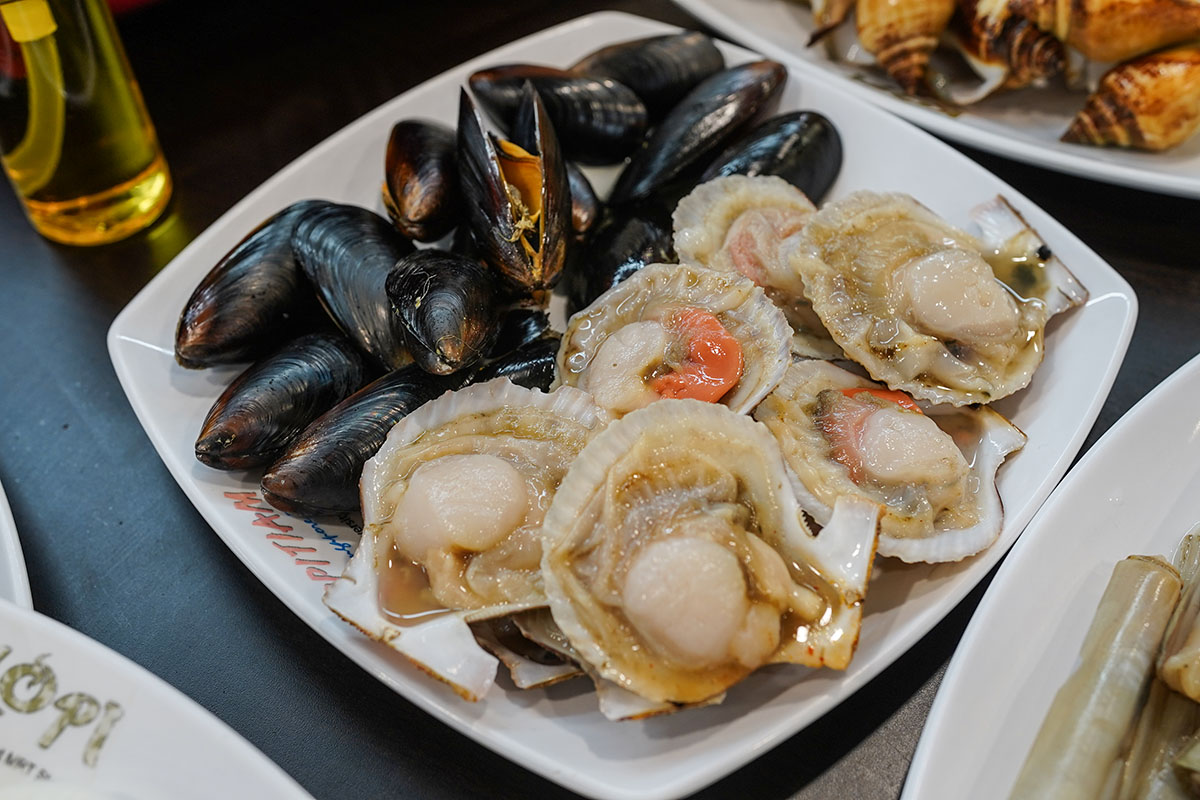 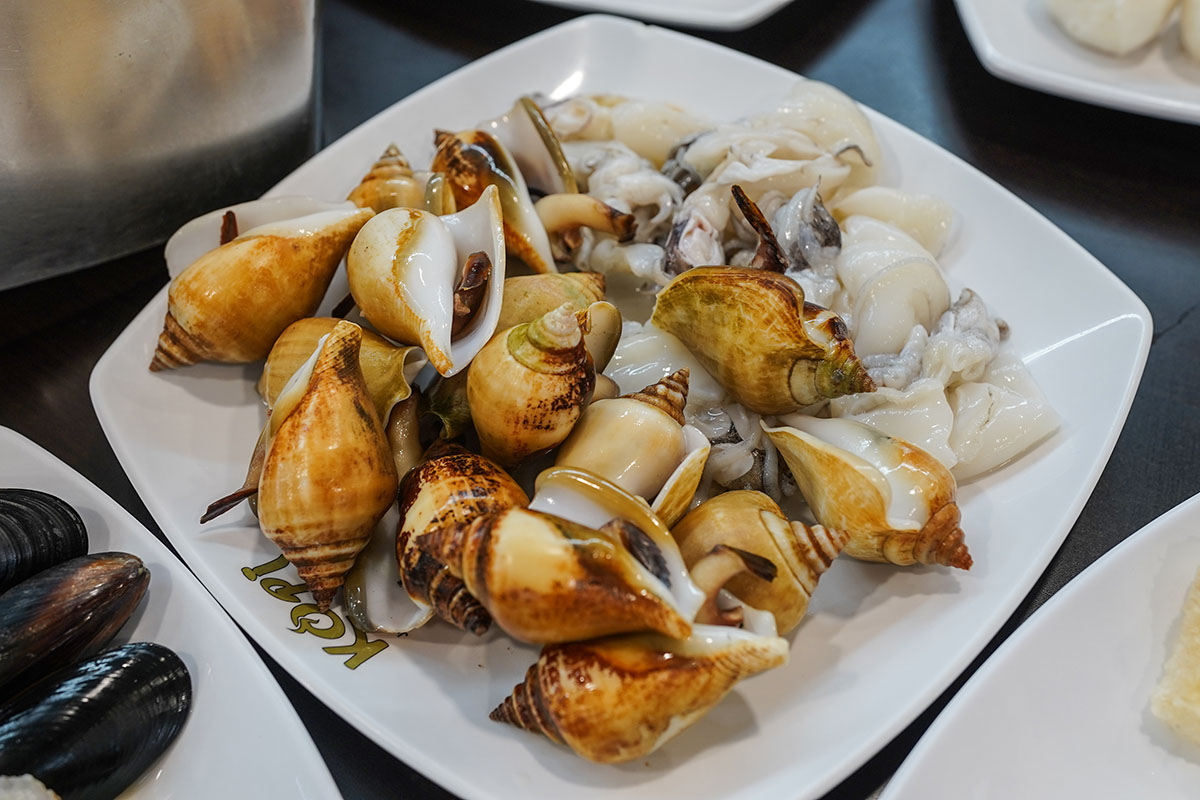 These were the better parts of my dinner I hoped to highlight, but like any typical KBBQ/Hotpot, staple items were also aplenty. Made readily available alongside the above mentioned foods were the typical noodles, cabbage, mushrooms and frozen produce. An assortment of sauces completed the menu. We didn’t see the need to add more punch to our already heavily tasting food, but what we observed was the undeniable pan-Asian theme that came in the form of options such as Ssamjang, Gochujang, Sambal Belacan, Thai Chili sauce, Soy and more.

I ended my meal with slowly savouring some of the Ginseng soup base. As anticipated earlier, it was gentle on the tongue and was a pleasant way to conclude the experience. Throughout, we couldn’t stop raving on how this was undoubtedly worth so much more than we actually paid for.

I hope to see it receiving more love and recognition with time!